As a novice opera aficionado, I wasn’t quite sure what to expect from Masterpieces of Russian Vocal Music: Famous Contemporaries, the Russian Chamber Art Society’s most recent offering at La Maison Francaise, the Embassy of France. This concert series is dedicated to Russian chamber vocal music, especially music rarely heard in the United States, and while I was looking forward to getting dressed up and experiencing something unusual, I truthfully didn’t know if I was in over my head. It turns out that the venue is the perfect way for a newcomer to immerse themselves in this much beloved art form and the evening, complete with wine and dessert and a chance to meet the artists, was one of the most enjoyable in recent memory.

The Famous Contemporaries production featured Russian-American soprano Inna Dukach, whose beautiful voice perfectly matched the intense longing and sadness often present in the song she performed. During the first half of the performance, she performed works by composer Nikolai Rimsky Korsakov, with lyrics by Russian poet Alexander Pushkin and presented the Washington area premiere of the Melodies Opus 16 song cycle with music by Alexander Tcherepnin and lyrics by Sergey Gorodetsky, which was a highlight of the entire performance. The text of song cycle, which was provided in English to all attendees, depicts a poet spending time at the seaside dreaming and communing with God, and the soothing music and beautiful lyrics combined joyfully into a relaxing and uplifting interlude during which I felt the stress of the week leave my body and was able to relax completely into the evening.

During the second half of the program, Ms. Dukach performed a variety of works with music by well-known composer Rachmaninov, including “How Fair this Spot” and another highlights of the show, “Oh, Do Not Sing for Me” during which she was accompanied by both piano, expertly played by Vera Danchenko-Stern, who is the Founder and Artistic Director of Russian Chamber Art Society and who also serves as Russian diction coach, and violinist Emil Chudnovsky, a highly accomplished musician who played with a grace and flourish that made him as nice to watch as he was to listen to.

Baritone Kevin Wetzel’s strong interpretation of his repertoire including Medtner’s “I Have Outlived My Desires” and “To a Dreamer,” both with lyrics by Pushkin, in the first half of the show added to the show’s appeal, but it was in the second half of the show that Mr. Wetzel’s voice and stage presence really came alive. “Oh, Do Not Grieve” by Rachmaninov was particularly moving and I realized that I would probably have been able to guess at the emotional subtext of this song just from the performance even if I hadn’t had English language lyrics to guide me. Mr. Wetzel’s closing pieces, “When Yesterday We Met” and “Oh, Stay My Love, Forsake Me Not” brought an extra round of cheers from the audience.

Rounding out the performances was pianist Azamat Sydykov, whose playing brought an extra sensitivity and emotional layer to each piece and significantly added to the audience’s ability to let the music consume them. Mr. Sydykov’s considerable talent paired particularly well with Ms. Dukach’s on-stage presence and I could imagine that the two enjoyed their time working together.

With a running time of 1 hour and 40 minutes (including intermission), novice opera fans will not be overwhelmed by the shear length of the program and the occasional commentary from the performers about the pieces they are about to present will help guide newcomers during the show so that they can even more easily feel they are seasoned fans. Similarly, the intimate setting helps the production feel friendlier and less intimidating than a full-scale opera might be, making the entire experience less of a performance and more of an evening spent with very talented friends.

For the price of admission, patrons will also be treated to wine and dessert, and a chance to mingle with the artists themselves, making a night out with the Russian Chamber Art Society feel like the perfect fancy night out. In fact, I might suggest that it makes for an unusual and surprising date night for about the same price as dinner and movie.

Running Time: One hour and 40 minutes, with an intermission. 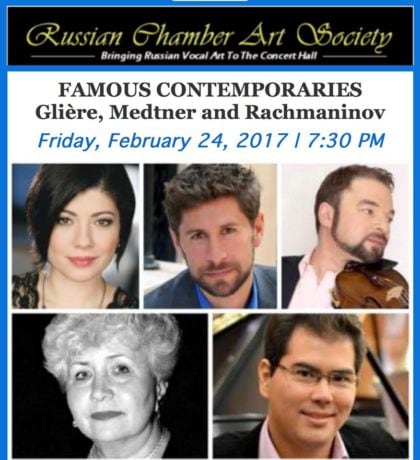