Ballet Theatre of Maryland’s production of The Little Mermaid, at Maryland Hall for the Creative Arts, is a gorgeous spectacle of storytelling through dance. Based on the Hans Christian Andersen fairytale, adapted and directed by Dianna Cuatto, it brings together talented dancers, colorful costumes, ingenious sets and lighting with the music of Claude Debussy and Maurice Ravel to take the audience on a magical journey, both under the sea and above it. 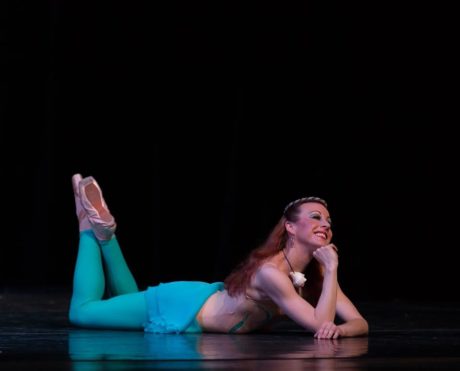 The dancers are tremendously skilled, able to convey the story and emotion through movement. Nicole Kelsch plays Pearl, the title character, with lightness and grace. Her curiosity and innocence come through perfectly. She also expertly plays at having a tail, swimming through the ocean with ease. One of her best solo performances has her trying out her human legs, dance-stumbling and swaying until she gets the hang of it. In another, highly emotional scene, she raises her arms in despair, twirling about the stage until her grief throws her to the ground.

Alexander Collen plays Prince Patrick with pure joyfulness and energy. He leaps and spins around the stage, nearly always moving. During one of his few emotional scenes, his pain clearly shows in his upper body. His connection with Kelsch is beautiful to watch; when they dance together, he almost constantly lifts her or holds onto her, sometimes upside down, while she folds herself into him. In one scene, while both are lying on the ground, she rolls onto him and he lifts her up from her waist.

Samantha Lucas portrays Atalanta, queen of the mermaids and Pearl’s mother, with commanding authority. Taller than the other performers, she looms over them all. At one point, she enters the stage carried by two masked dancers. One of her most powerful performances is with Pearl, her exasperation pouring forth in one shocking act. In another dramatic performance, she brings her full presence to bear to defend Pearl.

The villains of this piece have powerful stage presence. Alyssa Johnson-Taylor brings a sense of menace to the sea witch Melusine. At the moment of her greatest triumph, she stalks across the stage with confidence, reveling in the anarchy she brings. She has a hypnotic, seductive quality that entrances both Pearl and Patrick; with just a few gestures, she manipulates the Prince like a puppet.

Calder Taylor as Aqualion, Melusine’s partner-in-crime, also has a sinister air about him. He and Melusine play a game of catch with Pearl, hurtling her back and forth between them, and drawing her further into their scheme. Lynne Bellinger plays Lorelei, the ash ray temptress. Her most powerful performance comes with Collen, twirling with him and melting into him perfectly.

Sabrina Schulbach plays Fathom, the conch fairy and Pearl’s friend. She is light and airy, gliding across the stage. One of her best performances comes through disguising herself from the humans, as a lamp or under the bedsheets, to great comic effect. In one scene, as Atalanta and Pearl’s argument starts to escalate, she places herself between the mermaids, trying to end the conflict.

Lauren Derrig gives Ellspeth, Patrick’s tutor, a quiet, noble strength and independence. She is an observer for much of the ballet, but defends the Prince at a crucial moment, flinging herself against her opponent. Even while dancing with the Prince, she seems to be on her own, gliding off at the right time.

Alyssa Johnson-Taylor Costume Design perfectly reflects each character’s personality, and enable the audience to keep track of who’s who. The mermaids wear short skirts with leggings, each with a different color, and a beige top with colorful wave designs on their front; Atalanta has a bright pink skirt and leggings, while Pearl has light blue ones. Fathom is in light pink and purples, looking exactly like a fairy. Melusine, Aqualion, and Lorelei are dressed in dark blues and purples, Lorelei in a body suit. The lobsters (Melissa Lucas, Elizabeth Calvert, Kaitline Kimm, and Karissa Kralik) wear red, frilly cocktail dresses, looking ready to dance a tango. Prince Patrick wears a white shirt and dark blue pants, with a light blue thin scarf around his neck. Ellspeth has a red, shiny dress. The jellyfish are umbrellas with stringed lights.

Susan Johnson, Calder Taylor, and Aaron Bauer have done excellent work with set construction, making distinctive, clever sets. For the underwater world, a backdrop painted with a castle and seaweed dominates the stage, while the mermaids sit on a bench backed by a clamshell. The Prince’s castle is a wall with three arches looking out to the sea, with a simple bed, table, and two big ornate chairs for furniture. For a rowboat excursion out to the lake, fog covers the stage. During a sea-storm, long, thin pieces of fabric flow across the stage to represent waves.

Stacie Johnson-Leske Lighting Design ws superb. During several dramatic moments, the lights flash for lightening. At another time, they twinkle like stars. The lights are brighter during the surface world scenes, helping to show the contrast with the mermaids’ realm under the sea.

Dianna Cuatto has done a wonderful job with directing and choreography. The dancers move effortlessly around the stage and each other. The dancing feels natural, and flows with the story. The music perfectly captures the mood of each scene. The plot is fairly easy to follow, although the program also includes a summary of each scene, which certainly helps.

A feast for the eyes and ears, The Little Mermaid brings together all the elements of great ballet for a performance sure to delight and enchant.

Running Time: Approximately 2 hours and 30 minutes, with a 20-minute intermission.

The Little Mermaid played from February 24 through February 26, 2017, at Maryland Hall for the Creative Arts – 801 Chase Street, in Annapolis,MD. For tickets to future productions, call the box office at (410) 280-5640, or visit their website.