What did happen to Sebastian last summer?

This sounds like a murder mystery, right? But if Tennessee Williams writes the mystery, one can be certain that it will be highly poetic, and involve questions about the nature and deep desires of mankind. Suddenly Last Summer is one of this author’s less-performed works, but this production at the Old Academy Players will prove rewarding to his fans.

The basic plot sounds like a horror story. Aunt Violet (Sandra Hartman) fears that her niece Catherine (Caitlin Riley) will reveal unsavory facts concerning the murder of Violet’s beloved son Sebastian. Violet’s plan, since confining the young girl to a mental institution hasn’t silenced her, is to have the famous but grant-seeking Doctor Cukrowicz (Brian Jason Kelly) perform a lobotomy on Catherine. Add to the mix some avaricious relatives (Susan Triggiani, and Lee Stover) who are waiting to inherit the son’s vast estate, and you have an intriguing horror mystery.

But Williams wants to go deeper than this. Entwined in the tale, like the Spanish moss in their garden, are deeper themes. Do people exploit others for their own needs, and is this the correct law of the jungle? Are Violet and Sebastian well-meaning poetic tourists or secret predators?

Upstage sits a typical Williams symbol, a Venus Flytrap, that attractive sweet-smelling plant that woos its victims to their doom. There is also a white nun (Emma Shope) who hovers over the proceedings like the angel in Summer and Smoke. Fans and readers of biographies of Williams will revel in the comparisons to the author’s own sad life, not to mention his better-known plays. The relatives seem to have dropped directly from Cat on a Hot Tin Roof, while the setting of the murder reminds one of Night of the Iguana. Williams’ handling of gay themes runs through all of his works, and by the 1958 premiere of Suddenly Last Summer, the forbidden subject was being discussed much more explicitly.

The difficulty lies in that Williams the poet is starting to overcome Williams the playwright. The tightly constructed conflicts of A Streetcar Named Desire are replaced here by monumental speeches of great length. Those speeches are some of Williams’ best writing, but they tend to overwhelm the drama, a problem that only grew in his later plays.

The actors, here directed by Rob Rosiello, whose fine work here demonstrates a reverence for the play, had their work cut out for them. The first third of the play is dominated by a long speech for Violet, while the final third is largely turned over to Catherine’s drug-induced narration of what happened. Both actresses handled these challenges well, making both orations spellbinding. Hartman and Riley have intensified the conflicts between the attractive mother who feels herself replaced and the younger woman in her boy’s life. The verse was well-handled, though reading this short play might be more rewarding than seeing it, as one can stop to savor the images or re-read difficult paragraphs.

The technical aspects were triumphant. The tiny stage was magically transformed into a lush garden in the Deep South. Designer T. Mark Cole’s skilled scene painting brought depth and atmosphere to the setting, which the color-rich lighting of Carla Childs and Nancy Frick enhanced. The costumes of Nancy Ridgeway and Helga Krauss defined the characters while dialect coach Theresa Schwartz completed the illusion.

Can one write a play where the leading character, Sebastian, is only spoken of and never seen? Playgoers out for an entertaining evening might question such a dramatic choice, but Williams’ fans revel in the enigmatic challenge of being forced to imagine how such a person might look and act. This little-seen selection from one of our greatest playwrights demands that the audience rise to the occasion. 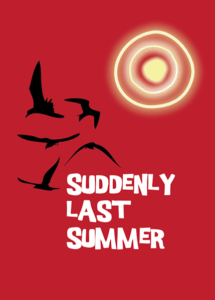