I loved the book and hated the movie, so I was really curious to see how The Giver, Lois Lowry’s Newbery award-winning story about a dystopian society where everything has gone to “sameness”, would hold up on the stage. Sameness, we are told, has solved a lot of the problems in the world. In sameness there is no discrimination, no war, no hunger, and no pain. But there is also no love, no compassion, and no true feelings. Such a cerebral topic, where much of the story is portrayed through memories that belong to both everyone and no one, seemed like a difficult stage adaptation. I couldn’t imagine how all the wonderful nuances of the book would be able to be conveyed to the audience.  However, I was pleased to discover that the play, adapted by Eric Coble, directed by Amanda Herman, and acted by an extremely capable cast, not only lives up to the promise of the book, but also adds another layer of depth to the story for those familiar with it already.

The main character of The Giver is 12-year-old Jonas, who is picked to be his society’s new “Receiver” or “Keeper of Memory.” Fifth-grader Aidan Chomicki’s portrayal of Jonas was the highlight of the show and he easily carried the story through Jonah’s growing understanding of the nefarious underside of the seemingly perfect world he lives in. Chomicki is a natural on the stage, seamlessly flowing from scene to scene, and, in this society where emotion is prohibited, providing the emotional connection the audience needs to be drawn into the story.

“The Giver” of the story, played by veteran actor Jack Seeley, is the perfect foil for Chomicki, both steadying the young actor’s performance and adding to the emotional impact. The relationship between the two characters is pivotal for the audience’s understanding of this society and the two actors play well off each other. In this society where parents and children have only the most cursory feelings toward each other, it is important for the audience to see the growth of the relationship between The Giver and his previous protégée, Rosemary, played by Mira Cohen (who also plays Jonah’s friend Fiona). In just a few lines, Mr. Seeley and Ms. Cohen help the audience understand the depth of The Giver’s feelings for his charge and the heartbreak of losing her.

Strong performances by Bess Kaye (Mother / Chief Elder), Olivia McMahon (Lily), Michael Sherman (Father), and Logan Wagner (Asher) round out the talented cast. There are more children in this cast than adults and it is a testament to their abilities and the expert direction by Amanda Herman that the show works as well as it does.

In this society where “sameness” is prized and color nonexistent, you might expect the sets, costumes and lighting of this show to be grey and bleak, and you’d be correct. But don’t be fooled into thinking there isn’t a lot going on here in terms of lighting, costume, and set design. The costumes are uniform-like, as a society centered on sameness would naturally have, but not boring. And Lighting Designer Sean Cox first uses flashes of color to show Jonah’s growing understanding of new concepts such as color, hills, and snow.

Running straight through without an intermission or even any real set change breaks is an accomplishment for any show and Amanda Herman’s direction combined with Jack Golden’s set design make that possible here. The set is utilitarian but easily switches from location to location, keeping the story steadily moving forward to its dramatic conclusion.

Accompanying me to this performance were two 10-year-olds who had not read the book. I gave them a brief outline of the story (note that the theater only provides a program digitally) and that was enough for them to follow the plot. Both kids enjoyed the production and it sparked quite the conversation about right vs. wrong, the importance of feelings, and the power of having choices in the car as we drove home afterwards. Bonus: Both kids are looking forward to reading the book now. I’d count that as a triple win for this excellent production of The Giver. 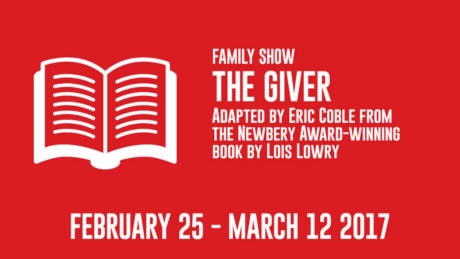