Arguments have been made that the theater is supposed to be a “safe place” where patrons can go to be entertained, away from the harshness of the world. Yet there is a large(r) number of people who believe that the role of theater is not just to amuse the audience, but to inform, critique, question, console, challenge, transform, and inspire. Art is not always complex or profound, but neither is it always simply a flashy distraction from reality.

This week, The Keegan Theatre opened Parade: a musical that is a far-cry from a “feel-good” story, based on real events surrounding a murder and the subsequent trial and conviction of a Jewish man in Atlanta, Georgia in 1913. The book is by Alfred Uhry, who grew up in Atlanta and was a descendant of the owner of the pencil factory, where the murder in the story occurred; Music is by Jason Robert Brown (well-known composer of other popular works such as The Last Five Years and The Bridges of Madison County).

The show focuses on Jewish factory manager, Leo Frank, played by Michael Innocenti. Frank is wrongly accused of raping and killing his thirteen year old employee, Mary Phagan (Cassie Cope). Frank’s innocence and guilt is less a matter of facts and more a desire for justice being served for an innocent life.

Drunken reporter Britt Craig (Harrison Smith) gets the scoop on the crime and celebrates in “Big News,” seeing the story as a big break for his career.  But not everyone is so cold. The town is angry and distraught at Mary’s funeral. Friend and sweetheart to Mary, Frankie Epps (Ricky Drummond), illustrates the blood thirsty desire for revenge in “It Don’t Make Sense.” And right-wing writer Tom Watson (Chad Wheeler) has taken a special interest in the case and uses his hate and rhetoric to fuel the fury.

Hugh Dorsey, played by James Finley, is the local prosecutor on the case and is told by Governor John Slaton (Timothy Hayes Lynch), in no uncertain terms, to get a conviction on the case.  nd who can blame him? The rape and murder of a young girl is not something that is easily forgiven or forgotten.  Especially a young, white girl in Marietta: a fine, Southern city in Georgia. Dorsey needs a conviction to ensure the future of his career and Frank is an easy target. But Dorsey further perverts the idea of “justice” with his chilling line that “hanging another Nigra ain’t enough this time. We gotta do better.”

In a time of Black Lives Matter and recent rises in anti-Semitism, the idea that a black man’s life would not be “enough” and a Jew’s life is expendable, regardless of who actually committed the crime is horrifyingly familiar.  Over 100 years after the events, the story is more relevant than is comfortable to admit. But this production is not about comfort. It’s about prejudice, fear of the “other,” herd mentality, and the need for power at any cost.

Also at the center of the story is the relationship between Leo Frank and his wife, Lucille, played by Eleanor J. Todd. Their marriage is a passionless one and Frank is clearly unhappy, expressing his feelings of being an outsider in “How Can I Call This Home?”. But as the show progresses, their relationship warms. Lucille sings the gorgeous and heart-wrenching song “You Don’t Know This Man” and the audience sees, for the first time really, that she truly does love her husband.

Leo is much slower to appreciate and trust in Lucille as an ally, which she sings about in “Do It Alone,” but his hesitation is forgivable considering what he is going through. They both sing “This Is Not Over Yet,” after Lucille informs Leo that she has convinced the Governor to reopen and review the case. The song is powerfully emotional. Leo is relieved about his case but he also realizes that he is not alone in his struggle; Lucille is fighting for Leo and finally gets appreciation and love from him. Their fight for Leo’s freedom is not over, and neither is the couple’s connection to each other.

Directors Susan Marie Rhea and Christina A. Coakley have done an exceptional job with this production. The cast is perfection, and every scene flows with intensity and genuine emotion. Rachel Leigh Dolan’s choreography is equally natural and engaging.

Jake Null’s Music Direction is nothing short of awe inspiring. The vocals are perfect and the power of the music is incredibly moving, aided by the Sound Direction of Gordon Nimmo-Smith.

Scenic Designer Matthew J. Keenan, did a wonderful job with the set which was entirely of wood. There was a large tree trunk in the center of the back wall and landings with stairs on each of the stage right and left walls, leaving center stage mostly open. Accentuating the set and guiding the general mood of the show was gorgeous lighting design by Colin Dieck.

Set Dressing and Prop Design, by Deb Crerie and Kay Rzasa, was extraordinarily simple but always 100% effective and clear with the cast using small stools and boards to represent tables, a coffin, a bed, and anything else necessary.

There is no shortage of beautiful moments and outstanding performances and it would be hard to name them all. Musical numbers were as essential to the telling of the story as dialogue, which is not always the case in musical theater due to weak scripts or poor execution. But this production is the complete package, with a fantastic script and score put on by a stellar creative team. And the entire cast is believable and committed.

Malcolm Lee as Jim Conly, the factory employee whose testimony is crucial to Frank’s conviction, leads in the soulful and chilling “Blues: Feel The Rain Fall.”

“Factory Girls/Come Up to My Office” is another phenomenal number, hauntingly sung by Iola (Molly Janiga), Essie (Retta Laumann), Monteen (Hillary Thelin), and Leo, where the girls give their coached accounts of how Leo Frank lured them to his office to molest them.

And early on, in a lighter moment of the show, Mary (Cope) and Frankie (Drummond) sing the adorably sweet “The Picture Show”.

Most notable though are Innocenti’s Frank and Todd’s Lucille.  They are amazing together. The evolution of their relationship throughout the show is painful but beautiful to watch. Their marriage transforms from disconnected and cold in “Leo At Work”/”What Am I Waiting For?” to loving and passionate in “All The Wasted Time.” Innocenti is mesmerizing and his connection with Todd is undeniable.

The Keegan Theatre’s current production of Parade is a wholly transformative piece of theater that made me not only forgot myself but my surroundings. I don’t like to throw the word flawless around but this production was exactly that. And with the heavy themes of racism and hatred that are all too relatable today, the message of the show hits painfully close to home.

Parade is the kind of show that leaves you feeling shaken to the core, but simultaneously inspired and motivated, which is something we can all benefit from right now. Do not miss The Keegan Theatre’s Parade.

Running Time: Two hours and 45 minutes, including a 15-minute intermission. 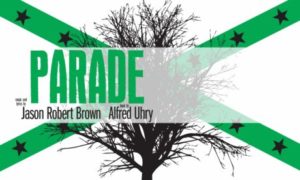 LINKS:
Review #1: ‘Parade’ at The Keegan Theatre by Coral Colón-Muñiz.

Review #2: ‘Parade’ at The Keegan Theatre by Kendall Mosafavi.