Happiness is a theatrical adaptation that successfully reinvents the original. The In Series’ production of Gabriel Donizetti’s 1843 comic opera Don Pasquale, now playing at GALA Hispanic Theatre (for way too short a run given the quality), has an inspired new English-language libretto by Bari Biern that adds hilariously fresh comedy to the wonderful music. Biern’s adaptation sets the story in present day la la land, complete with a boozy, lecherous, geriatric rock star, a feel-good doctor and sometime spiritual guru, groupies, roadies, bodyguards, and personal assistants, millennial star-crossed lovers, and, of course, lawyers. Oh, and a nun.

It’s a joy to experience a show when the contributions of director (Elizabeth Pringle), conductor (Stanley Thurston) and instrumental ensemble (Sonia Garcia, Alison Konopka, George Ohison, and Anna Bain Pugh at this performance), production team and performers are all terrific. The sum of these contributions is downright unbeatable entertainment.

Terry Eberhardt brings a Spinal Tap meets Mick Jagger zaniness to the title role. Costume designer Donna Breslin rifled through the closets of Michael Jackson and Little Richard to give him that yesteryear star image (the male rock star equivalent of Baby Jane or Norma Desmond?). To the audience’s delight, Eberhardt nails the physical comedy while filling the theatre with his rich bass baritone.

Suzanne Lane has dual roles: Norina, the love interest of Ernesto, Don Pasquale’s ne’er-do-well nephew, and Sophronia, the demure, convent-educated nun on whom Don Pasquale’s marital sights are set. Lane has a beautiful soprano voice and wickedly good comic timing. Whether dressed in yuppie threads, Fifth Avenue chic, or looking like Little Orphan Annie at a funeral, she mines each laugh for what it’s worth and more. As the demure Sister Sophia, she wrings as much humor out of manipulating her nun’s veil as any comedienne.

As the Machiavellia masterminding the plot, Raymond Ghattas plays Dr. Malatesta, physician, advisor and guru to Don Pasquale. He schemes, he coaches and he offers droll commentary. In his duets with Eberhardt and Lane, he’s a master of cockamamie rhymes and clever asides.

The fine ensemble — Chris Herman, Elliot Matheny, Garrett Matthews, and Beth Rubens — also adds much to the merriment as beleaguered staff to the Don and his wife on the songs “Where’s Her New Armani Jacket” and “Twenty-Four Seven We’re Running and Fetching.”

Jonathan Dahm Robertson stylishly evokes the opera’s settings with backdrop projections and just the right furniture and accessories, abetted by Alex Keen lighting design. Pasquale’s living room is awash in luxurious colors with wall-mounted guitars, gold record plaques and a gilt-framed portrait of himself on the walls. A coffee shop (bearing the composer’s name, no less) has a few metal cafe tables backed by exposed brick walls with stock art and a chalkboard menu.

At the end of Act II, a justice/notary (played by Chris Herman) is called to the Don’s mansion to legally seal the deal on his deception. Herman whips her head around in all directions to follow the antics and chaos of the principal characters and it reminded me of a line from the classic comedy, My Man Godfrey: “All it takes to make an asylum is an empty room and the right kind of people.”

The In Series has assembled the right kind of people for “Comedy Tonight.”

The commissioning of the new English libretto for this adaptation was made possible in part by funding from the Reva and Dan Logan Foundation.

Running Time: Two and 30 minutes, with one 15-minute intermission. 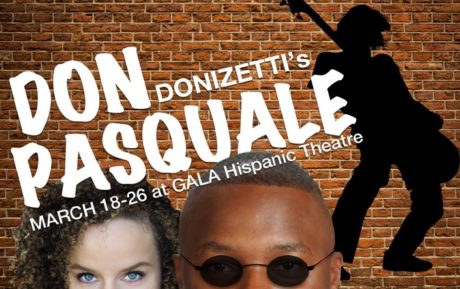