Irish playwright Conor McPherson’s The Night Alive is a story of lost souls seeking redemption, of searching for a light in the darkness. Presented by Scena Theatre, the characters’ cheeky banter masks deeper questions that they are wrestling with. The show balances humor and heart—no mean feat for Director Robert McNamara, who guides this show to its surprising conclusion.

Barry McEvoy plays Tommy, whose moneymaking schemes (including a tent business that fell apart when his tents kept being struck by lightning on sunny days) have landed him in the downstairs apartment in his Uncle Maurice’s house, estranged from his wife and children. Tommy and his friend Doc (Brian Mallon) have an odd couple dynamic that’s always good for a few laughs: from Tommy’s efforts to get around paying Doc for his labor through more moneymaking schemes, to Doc’s raids on Maurice’s vegetable garden against Tommy’s advice. Brian Mallon brings a sense of cheerful optimism to Doc’s attempts to keep up with a world that moves more quickly than he does.

The action of the play takes off with the arrival of the troubled Aimee (Mollie Goff), whom Tommy has rescued from a violent altercation with her boyfriend. Aimee is standoffish at first, not letting her guard down, and neglecting to mention her extracurricular activities as a prostitute. Aimee is perhaps the least fleshed out character in the play, while being the most talked about. She remains caught between the Madonna/whore archetypes, an object contributing to the development of the other characters, particularly Tommy, who sees in her somehow the key to his own redemption. But Goff also manages to show us a little of the character’s warmer side: in one of the more spontaneous moments of the show, she, Tommy, and Doc bond while dancing to Marvin Gaye on the radio.

All seems well until the arrival of Aimee’s ex boyfriend Kenneth (Robert Sheire), whose demands quickly escalate into violence. Sheire does an excellent job portraying Kenneth’s brutality in later moments, but he lacks subtlety at the beginning. From the moment he appears on the scene, we know what is going to happen—an approach that feels more like a punch straight to the face than the quieter, more menacing rolls of thunder that could have heightened the drama of the final confrontation.

It is Ron Litman’s Maurice who steals the show in spite of his infrequent appearances. His introduction as the cantankerous, penny-pinching landlord later gives way to the deep sadness over his wife’s passing. His journey of what-ifs and regrets, and his struggles with loneliness and being forgotten, are among the most touching moments of the play. And in the end, it is he who can offer guidance to Tommy in his moment of crisis.

Michael C. Stepowany’s set consists of the small, one-room apartment that Tommy and Doc inhabit, with a small twin bed and a camp bed. It’s not as messy or unfit for habitation as Maurice complains it is; it fits better with the idea of a home than with a pit where lost souls gather. Lighting Designer Marianne Meadows works with Sound Designer Denise Rose to set the atmosphere of  the place, showing both the passing of days and the day-to-day background of this small Dublin house.

McPherson’s story does not moralize, but it does provide the following in the way of advice: “you only get so many goes” at life. Expertly orchestrated by Robert McNamara, Scena’s Founder and Artistic Director, it is left up to the characters to discover them.

The Night Alive may not have all the answers, but it offers a compelling search.

Running Time: One hour and 45 minutes, with no intermission. 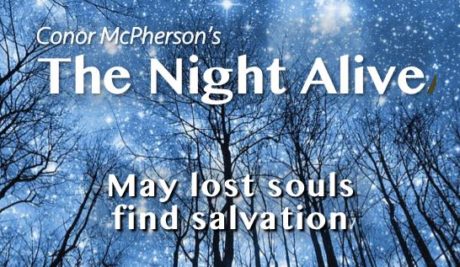