It was night like any other night in Charm City; me and my fella were sitting home, gabbin’ about what to do. We remembered hearing some buzz about a brand new play that ain’t never been seen before. A local company man named Trevor Wilhelms wrote and directed the piece – The Shattering Frame: A Bridgette Miakowski Mystery. It was opening night and we wanted to get in on the action, so me and my squeeze headed to The Annex Theater (Annex), a joint where the art kids do some pretty ace make-believe.

The Shattering Frame ain’t your granddaddy’s hard-boiled detective story. This noir potboiler’s got a modern twist or two. For one thing, our Philip Marlowe is a dame. But don’t worry; she’s no creampuff. A kid who’s looking for her sister has Miakowski on the trail of a bunch of missing kids from the wrong side of the tracks. This gumshoe’s not going to stop searching no matter where the case leads, from the gutters of Southwest Sector all the way to the Mayor’s mansion.

Autumn Breaud plays Bridgette Miakowski, a former sheriff’s deputy who set up shop as a Private Jane. Breaud gets top marks for projecting just the right mix of world-weariness and dogged determination for a private eye in the storied tradition of this genre.

Liz Christmas gives a crackerjack performance as The Kid, the little doll who is both Miakowski’s client and the narrator of the show. Christmas’s stoic, deadpan narration is pitch perfect – dry like a piece of toast at the diner where your ex-wife works the broiler. And her Pacing. Is. Awesome. She kills it.

Mika J. Nakano plays The Sister that The Kid hires Miakowski to find. These skirts have a back story that would make an onion cry. Orphaned, they’re behind the eight-ball ‘til big sis can bring home some greenbacks to keep the lights on. Nakano does a bang-up job, showing The Sister’s comforting affection for the youngster and her strength in their hardscrabble world with equal aplomb.

Playing The Mayor, who’s a real piece of work, Jacob Zabawa’s got a kisser that looks like the cat who ate the canary and a voice like a game show announcer who is too punchable for his own good. Zabawa throws himself 100% into every line, gesture and movement; the result is a bigger than life performance as this bigger than life character.

Scott Burke is the sheriff, named Tiger Brown – a nod, I presume, to The Threepenny Opera. This flatfoot’s police department is as overextended as Cats on Broadway; looking for some lost guttersnipes isn’t at the top of his to-do list. Burke’s performance as the lawman is as solid as a brass-knuckled handshake.

Dave Iden and Nina Kearin play the twins, Simon and Sorin. These two are a special kind of different. They’re the smartest cookies in the whole bakery, but are as out of touch as your kid at college until he needs to borrow a fin. Iden and Kearin steal every scene they’re in. They’ve got excellent comic timing, a memorable physical presence, and they’re so well in sync you’d think they share a brain.

Sarah Heiderman sizzles as torch-singing femme fatale, Demi Gamorrah. This canary’s got a voice as smooth as honey and twice as sweet. It was during the scene at her dive that I most felt like I was in a noir drama, not just watching one.

Costume Designer Kristina Green has got this cast decked out in style. From Miakowski’s Bogie trenchcoat to the Mayor’s shiny suit and long red tie, these cats are dressed to the nines.

Filling your ears with silky jazz noir, Martin Kasey on sax and Rick Gerriets on drums create a soundtrack so essential it feels like another character in the show.

The man of the hour is Lighting Designer David Crandall. His clever design has the lights literally follow the action, casting dramatic shadows and giving the whole theater a gritty, film noir atmosphere. They realistically replicate everything from the stark light of a street lamp to the swinging of a bare light bulb over a goon who’s about to spill the beans.

There’s particularly well-crafted lighting when Miakowski and The Kid are driving in a car. The effect of the passing streetlights and headlights are mesmerizing and create an immersive, right-there-in-the-thick-of-it experience. The scene is fantastic, but they’re in that jalopy so long it made me think ‘For the love of Pete, where’s their destination? Casablanca?’

Rounding out the team, Stage Manager Izzy Gefner and Props Master Molly Margulies hit the mark with the behind-the-scenes magic that makes the whole thing come together and keep it on track.

Trevor Wilhelms has penned a play as hardboiled as a two-hour-egg but as modern as next week’s news. No place could put this piece on better than Annex Theater; their willingness to take creative risks in pursuit of artistic reward makes them the vanguard of daring, edgy, and experimental theater in the area. This production is a great example of the bold work going on in their intimate storefront space. So beat a path downtown to Annex Theater and give The Shattering Frame: A Bridgette Miakowski Mystery a looksee. Savvy? 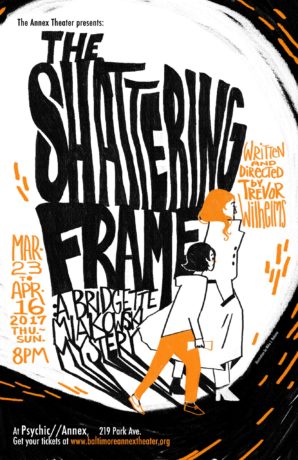 The Shattering Frame: A Bridgette Miakowski Mystery plays through April 16, 2017 at Annex Theatre – 219 Park Avenue, in Baltimore, MD. For tickets, buy them at the box office, or purchase them online.

ALERT: Strobe lighting effects are briefly used during performances of The Shattering Frame: A Bridgette Miakowski Mystery. Patrons with epilepsy or sensitivity to visual light stimulation effects are advised to alert the front of house staff when checking in.