Steve Underwood earned his M.A. in Theatre at Villanova University, and holds B.A. in English from Temple University. As an active writer and actor, he completed his oral thesis at Villanova in Playwriting. Most recently he wrote and performed in Melvin’s Last Ride and appeared as Advocate Rott in Beacon Theatre Productions’ mounting of Bonhoeffer’s Cost, in addition to being President of the Board at Beacon. In addition to his writing, film and stage acting, this past summer, 2016 Steve held the principal role of the swashbuckling Pirate King in The Savoy Company’s award-winning Gilbert & Sullivan operetta The Pirates of Penzance, which toured in England and played both at Longwood Gardens and the Suzanne Roberts Theatre in Philadelphia. A former high school English teacher, Steve has a passion to use drama as a teaching tool, by making stories come alive and immersing audiences in the communal experience of theatre.

Beacon Theatre Productions is dedicated to offering thought-provoking productions that encourage further reflection and discussion with an emphasis on a fresh look at historical events and well-known literary works. Beacon also provides tools for further reflection in the form of talk-backs and speakers’ nights with authors, actors, playwrights, and directors, and publish study guides to encourage critical thinking and wrestling with significant issues, and has a variety of historical dramas available to book for communities.

Lisa: How and why was Sherlock Holmes: The Final Adventure chosen for Beacon Theatre’s audiences?

Steve: I first read Steven Dietz’s script [based on the 1899 play by William Gillette and Sir Arthur Conan Doyle] in 2010, around the same time that my colleague Georgina Bard wanted to start her own theatre company. That company eventually became Beacon Theatre Productions, although when I entered grad school in 2011, any thoughts of directing got put on hold. But it actually worked out better, because with six years under my belt and a Master’s in Theatre, I’ve returned to the play with a lot of ideas I wouldn’t have had otherwise. Plus, after working with Georgina in 2015 on Bonhoeffer’s Cost – she cast me as Manfred Rott, the Nazi – I saw firsthand how Beacon focuses on history- and literature-based theatre. Ever since then, she’s asked me to consider coming back to do Sherlock Holmes, and I think the great detective occupies a realm the company hasn’t explored yet, one that fully encapsulates the macabre thrill of suspense literature but remains firmly grounded by a period historical setting.

What is your relationship to the Sherlock Holmes stories, or character? What intrigues you about Sir Arthur Conan Doyle’s detective?

My first exposure to Sherlock Holmes was watching the Jeremy Brett Granada TV series with my dad, who was big on British whodunits. I guess it wore off on me. Personally, I find Holmes compelling because he makes intelligence look powerful and cool. Brett was the first actor I saw who exposed that, along with the other elements of Holmes’ paradoxical nature–his cagey brilliance, the moody friendship with Watson, a surprisingly ruthless enjoyment of catching foes, and almost complete disregard for social conventions. Basically, Holmes is a tempest in a Victorian teapot, but what intrigues me even more as I read the books is that he isn’t necessarily a good man. He’s got all the makings of a master criminal, and seemingly uses his genius to serve the law only because it’s more convenient than going to prison. That’s a very noirish concept, except Arthur Conan Doyle created Holmes long before the age of the gritty private eye. Regardless, the cruel streak of nihilism is still in him; Conan Doyle once described Sherlock as being “as inhuman as a Babbage’s calculating machine.” As a result, it’s Watson, the fictional biographer, who actually humanizes Holmes. I love that liminality: that there’s a thin line between hero and villain, and Holmes stands firmly in the middle. He’s a good guy who isn’t necessarily good, a criminologist who thrills to the intrigue of evildoers. He thwarts them because of his genius and becomes heroic by proxy. That’s far more interesting to me than watching a flawless, one-note crime stopper.

Out of the many theatrical works based on Sir Arthur Conan Doyle’s infamous detective, what made you choose to direct this particular Sherlockian play?

What I enjoy about Steven Dietz’s adaptation is that it’s very dynamic while hewing close to Conan Doyle’s canon. This isn’t the stately, reserved Holmes who solves your mystery without ever leaving his couch. This Holmes is energetic, a firebrand, and he slips about the alleys of London gathering the clues that lead him to Professor Moriarty. Dietz takes classic moments from the Holmes canon and frames them in a fast-paced, almost action movie narrative. Not to simplify Holmes, who still remains a bit of an enigma, but to reinforce just how much danger is a part of his trade. Also, Dietz suggests tragic backstories for nearly every character, which is a challenge at first, because if you read the old fashioned dialogue at face value, the characters seem melodramatic or, worse, like buffoons. The trick is, once you uncover what’s brought these people together, you realize every single one of them is traumatically damaged. And what’s more, they’re not really altruistic. The result is an ensemble piece where every character repeatedly engages in a battle for psychological dominance.

How have you used the performance space to form your vision of the play?

We perform at Olivet Covenant Church, and the challenge is that it isn’t necessarily suited to the technics of professional theatre. What we’ve done, however, is turn the intimacy of the space into part of the show. There’s a traditional proscenium stage like you’d expect, but then characters step down to the floor, directly in front of the audience, and continue the scene. It extends the fourth wall right up to where audience members are sitting, in effect making them part of Baker Street, Moriarty’s Gas Chamber, or Briony Lodge, etc. Dr. Watson, as narrator, breaks that fourth wall frequently to engage viewers, and the action–with characters entering and exiting through the audience–feels like it’s going to spill into the audience’s laps. I love immersive theatre and disorienting viewers so that they’re never sure what comes next. I’ve found it keeps them actively engaged and, more importantly, invested in the story. I hope it’s exciting for people. I hope audiences agree.

What would you like audiences to take home from this theatrical experience?

My goal is for audiences to feel like they’ve been transported from a church in Philadelphia to the mysterious streets of 1890s London, through lights, sounds, music, and acting. The greatest success for this show would be if we can get people young and old alike to believe, if only for one evening, that a literary hero was brought to life before their eyes. That, I think, is among the greatest thrills theatre can provide, and it’s my greatest source of joy as a storyteller. 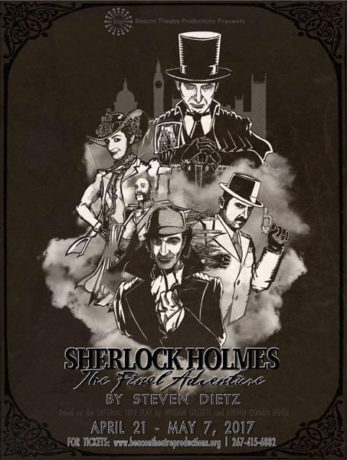