Every time I send a reviewer to Howard University to review a show they always have this reaction: “Oh My God!!” And there were many divine moments when I saw the final perfomance of Howard University’s Spring Dance Concert entitled Unjust, a collaboration between The College of Arts and Sciences Division of Fine Arts, and the Department of Theatre Arts. Even the School of Communication chimed in with the effective videos which were with vintage newsreels which included Martin Luther King, Jr., President Lyndon Baines Johnson, and numerous young men who were unjustly killed by White Policemen recently. The videos were powerful and heartwrenching, and educational.

The videos set up the seven dances and the dance improv finale of Balante, (See below), that was one of the most joyous and exciting moments I have experienced in the theate or at a dance program, or concert, or performance. There was so much love and elation on that stage that I am still experiencing it two days later.

Choreographer Ella Rothschild spent the Fall 2016 working with the Dance Arts Students and her 12 Postdaded Checks, which part spoken and part dance was an attack on gentrification, and the effect it has on the economics and culture of the neighborhoods who they are trying to ‘replace.’ With music from by Valery Gergiev and the London Symphony Orchestra performing Romeo and Juliet’s Act I, Scene XIII’s Dance of the Knights, the piece was powerful.

The costumes were by Kendra Rai (except for Funnyhouse and Balante), and lighting was by TW Starnes and Fallon Williams (except for Power Goes , who provided the costumes for 5 dances and the lighting for 6 dances. And they appeared to use every color of the rainbow in their work and proved again why they are so well respected for their designs. Simply stunning!

Other Dance Performances were: 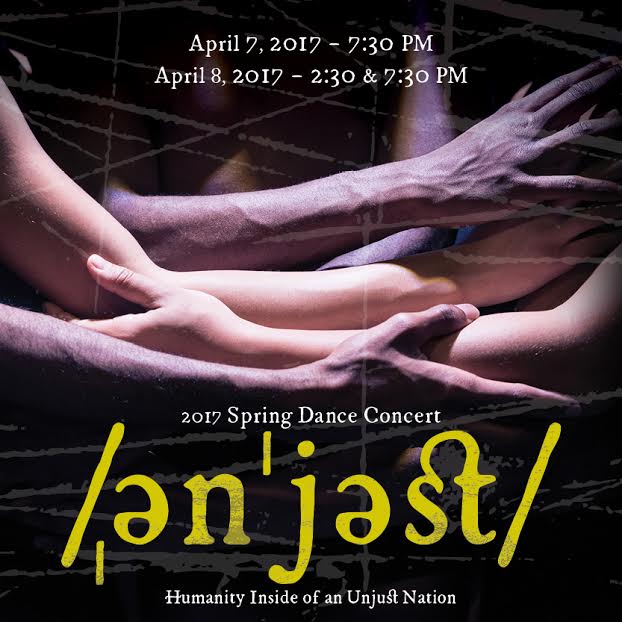 –Full Circle, with choreography by Chris and Ama Law, and music by Luis Salinas and Digital Planets by Melissa Harris Perrry.

— Funnyhouse, with choreography by Crystal Michelle, and music by Cassandra Wilson, with costumes by L’Amour.

My favorites, besides Balante and 12 Postdated Checks?

–Incumbent with its classical ballet style – elegant, beautiful, full of passion – just like its choreographer Hinton Battle when I saw him perform on the stage.

A story about guilt, loyalty, and choice…Torn between his duty as a countryman and the forbidden love of his life, he paints a picture that truly shows the weakness of human moral and condition. A war he wishes not to fight, nor a war he believes in…He experiences and inflicts “a different kind of love.”

Frightening, powerful, and energetic with incredible choreography with awesome performances by all the dancers, it shook me to my core and left me shaken and afraid.