A world-premiere musical adaptation of George MacDonald’s 19th-century Scottish fairytale The Light Princess, with book and lyrics by Tony Lawton and music by Alex Bechtel, is the latest offering from Arden Theatre Company’s acclaimed Arden Children’s Theatre. The full-stage production follows an earlier musical workshop reading, created by the collaborative team of Lawton, Bechtel, Aaron Cromie, Dave Jadico, and Matt Pfeiffer, presented with Lantern Theater Company in the 2015 Philadelphia Fringe Festival, and performed with the ebullient Tabitha Allen in the titular role. Directed by Steve Pacek, the current show, appropriate for ages six and above, has undergone revision (most notably cutting the more mature dialogues and some adult innuendos), but still teaches kids important lessons about the fundamental need for empathy, love, and the expression of sadness through tears.

The moralizing legend follows the growth of a royal baby, cursed to a life without gravity (both physical and emotional) by her evil aunt – a vengeful swamp-dwelling wicked Witch (played with sinister delight by Bechtel), whom the King (Rob Tucker) and Queen (Emily Gardner Xu Hall) chose to exclude from their infant’s christening. As a result, the Princess (Brett Ashley Robinson) floats through the air if not weighted down, and floats through life with a loud, taunting, flippant attitude, without the least bit of concern for others. All that changes when the handsome heroic self-sacrificing Prince (also played by Bechtel) arrives on the scene from faraway, to save her from the spell, to teach her the meaning of love and consideration, and – you guessed it! – to live together happily ever after.

Combining narration (by Lawton, who also plays an array of well-distinguished minor roles, adopting a convincing Scottish brogue as the author MacDonald), puppets (representing the buoyant Princess at younger ages or immersed in water), and live enactments and music (by the entire multi-talented ensemble, with Bechtel serving as Music Director and Conductor), Pacek keeps the action flowing. The actors move around the stage, through the center aisle, and to surprising heights in the theater, as the athletic Robinson pops up in unexpected places, Bechtel’s amusingly menacing Witch interacts up close and personal with the audience, and Lawton enlists the aid of a child in attendance to help him read a secret message.

But it’s not just the kids who will be enchanted. Two of the funniest lines, delivered by Lawton (a hilarious malapropism for “Dominus vobiscum” and a reference to the late singer-songwriter Prince), will have the adults laughing (or maybe groaning) out loud. And the show’s original music is top-notch (save for a few sung notes that went flat), with the actors accompanying themselves on accordion, guitar, violin, percussion, and the ubiquitous piano that they push around with the story’s changing locales. Among the highlights are the ensemble’s harmonious opening and closing numbers – “A Magic Country” and “Until You’ve Cried a Little” – which set the stage and affirm the moral, and the Witch’s sidesplitting solos – “Something to Remember Me By” and “I’ll Teach You to Be Happy” – delivered by Bechtel with enthusiastic sneers and eyebrows raised and lowered in keeping with the beat.

The story is supported by a sparse but clever set design by Nick Benacerraf that shifts easily from castle to lake to a cloud-filled sky with the hanging of a painting, the unfurling of rows of blue fabric, and the suspension of bales of fluffy white cotton on pendant lights that move up and down with the scenes. Oona Curley’s lighting illuminates them realistically, then makes them flicker magically, with the hexing gestures of the Witch and eerie sounds by Rick Sims. Witty costumes by Jill Keys, with colorful patterns and makeshift crowns,  suggest the historic time, place, and society (while clearly dating from the present) and allow the actors in multiple roles to change quickly from one character to the next.

Arden’s production of The Light Princess is a bewitching way to teach the value of empathy to all ages, through engaging music and the age-old tradition of didactic storytelling.

Running Time: Approximately One hour and 40 minutes, including an intermission. 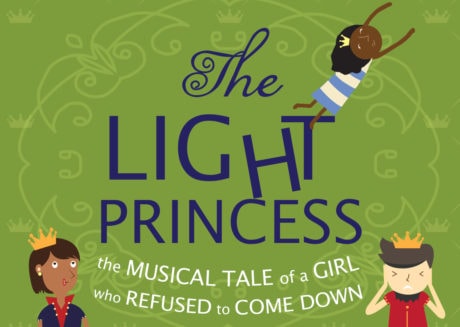