I’ve got to make this quick because there are only two more chances to see the fully staged, workshop performance of Sally McCoy at The Strand Theater Company (“Strand”), and one of them is in just a couple hours. You’re going to need some time to cancel your plans for tonight and buy a ticket. In fact, why don’t you go ahead and do that now. I’ll wait.

This weekend only, you can enjoy Sally McCoy – the second offering in the Strand’s Women on Top Series theater festival. The company, which holds the distinction of being the sole “brick-and-mortar theater in Baltimore this season to present outstanding works written only by women artists,” began the Women on Top Series in 2016. The annual, curated collection of projects-in-development by women theatre-makers is one of the many ways the Strand works to support and amplify women’s diverse voices and viewpoints.

Sally McCoy was written by Alice Stanley. You know Alice, right? In addition to being the co-founder and co-artistic producer of Cohesion Theatre Company, they have had several of their short plays featured in showcases like Rapid Lemon Productions’ Variations Project and Fells Point Corner Theatre’s 10x10x10 Play Festival. They were the Festival Director for ParityFest Baltimore 2015 – a city-wide series of staged readings of “un- and under-produced works by female and transgender playwrights” and the mind behind some of the most inventive productions of classics that I’ve seen (including Seattle Grunge Hamlet and Appalachian Bluegrass Henry V). Among their well-deserved awards are the Mayor’s Individual Artist Award (for the Trans* Voices Workshop Series), Bad Oracle’s B.U.L.S.H.I.T. Award for Best Director (Edward II) and two of our very own DCMTA 2016 honors – Best Director and Best Sound Design (for Hamlet).

Sally McCoy is Stanley’s first full-length play and holy cow, is it good… and it’s not even done yet. The Strand production is a fully staged, book in hand, workshop performance. It’s an opportunity for Stanley to see how the show looks and sounds live and to get feedback for the piece’s further development. The script has gone through several iterations so far but, from what I’ve seen, it’s really close to being ready for mass consumption in a full-on production.

The story takes place in the midst of the “first gruesomely violent event” of the storied feud between the Hatfields and McCoys. In it, Sally – the matriarch of the McCoy family – has traveled to the home of Hatfield family leader, Devil Anse Hatfield, who has the lives of three of her sons in his hands. This is an historical fact; it actually happened. What is unknown is exactly what occurred while Sally was at the Hatfield’s home. Sally McCoy is Alice Stanley’s imagining of what transpired during that visit on Aug. 9, 1882.

Sally McCoy gives a plausible account of the courage and heartache of a woman desperately trying to protect those she loves. In doing so, it not only provides a window into the role of women a century and a half ago, it shines a light on the ways that role has changed – and the ways it has not – in the modern day. Yet, it doesn’t come off as a “political piece” or a cautionary tale about the backward direction that some folks in our government seem to want to take the country regarding women’s rights.

The exceptional cast of actors, who had very limited rehearsal time, were so mentally and emotionally invested in the show that after a short time, I didn’t even notice it was a book-in-hand performance. Especially impressive is the connection evident between the actors; as they converse in well-crafted dialogue or react to each other onstage, they are fully present and in sync with each other.

Katharine Vary, as Sally McCoy, gave the best performance I have seen from her – and that’s saying something. Her interactions with Jonas Grey, whose portrayal of the painfully resolute Devil Anse Hatfield was both chilling and sympathetic, were heartfelt and beautiful. As were her scenes with Matthew Payne, whose earnest and honest-feeling depiction of kindhearted Johnse Hatfield provided a counterbalance to Jane Jongeward’s sociopathically aggressive Cap Hatfield. Jongeward’s explosive, reactionary Cap kept an already simmering sense of tension and foreboding at the brink of boiling over. And John Wright, as Valentine Hatfield, embodied the central conflict of the play; he was a well-educated and forward thinking judge, but he also held on to the old notions of fairness and vigilante justice. 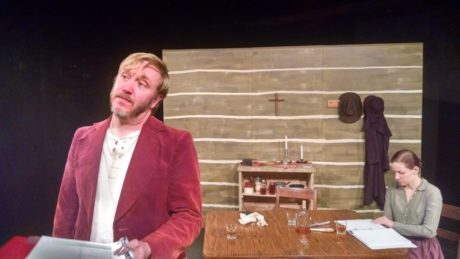 The inimitable Alice Stanley’s Sally McCoy is directed by Deirdre McAllister and produced by champion of women’s voices, Elena Kostakis at The Strand Theater Company. Technical Direction is by Lana Riggins. Heather Johnston designed the period-appropriate costumes and dramaturg-about-town Abby Cady became something of an expert on events in the Tug River Valley during the Civil War and subsequent Reconstruction. Stage Manager Aris Hines made sure that even in this workshop format, sound and light and everything else proceeded smoothly.

In a balancing act that is particularly noteworthy because this is Stanley’s freshman effort at a full-length play, Sally McCoy can be enjoyed on many levels. At face value, it is an emotional drama about love, courage and family; it is also an entertaining bit of historical fiction. But if you want to look a little deeper, you’ll find an intricately connected set of themes spanning women’s issues, gender roles, religion, modernity, and the way that we trap ourselves when we unquestioningly accept “conventional wisdom.”

Whatever way you choose to approach Alice Stanley’s Sally McCoy, you need to do it soon. Who knows? After this one-weekend-only run at The Strand Theater Company, you may not have another opportunity to enjoy it before you’ll have to shell out $100+ and plan a trip to NYC. Because that’s the kind of future I can envision for this work. Don’t you want to be able to say you saw it way back while it was still being workshopped in an intimate theater in Baltimore?

The remaining two performances are tonight at 8:00pm and tomorrow at 2:00pm. Get going!