Ovations Theatre hits another one out of the park with their production of Hairspray, Jr. performed entirely by 3rd through 9th graders.

With a book by Marc O’Donnell and Thomas Meehan, music my Marc Shaiman and lyrics by Scott Whitman and Marc Shaiman, Hairspray tells the story of Tracy Turnblad’s desire to dance on The Corny Collins Show and her attempts to racially integrate the show in racially divided 1962.

This is some serious subject matter hidden behind the veneer of early 1960s sounding upbeat bubblegum music. It was impressive to see these young performers tackle the subject matter with such maturity. This production has me pretty much convinced that Director Darnell Patrick Morris (he’s also Ovations’ Artistic Director) is one of the most talented children’s directors in DC. The amount of talent and professionalism he extracted from this large group of young performers was nothing short of amazing.

To allow a larger group of young performers a turn in the limelight, the main characters were all double cast. In the performance that I saw, Tracy was performed by a very talented Lilly McKinnon. McKinnon started the show off with a rousing rendition of “Good Morning Baltimore.”

Before the song’s end, it was clear that this was a first-rate production. As the ensemble joined Tracy onstage, audiences were treated to a bevy of early 1960s inspired costumes (Costumes by Eleanor Dicks). No expense was spared on the setting either, which moved seamlessly between an outdoor Baltimore street scene, the groovy interior of the Corny Collins TV studio, and Motormouth Maybelle’s hip downtown record shop.

This was truly an ensemble piece and each person on that stage did an excellent job. Space allows me to highlight only a few of the performances that stood out and deserve special mention. Olivia Gilbert as Motormouth Maybelle, the sassy record shop owner and host of “Negro Day” on the Corny Collins show, brought the house down with her huge voice the 11 o’clock number “I Know Where I’ve Been.”

The role of Tracy’s mother Edna Turnblad is always done as a drag role, most famously by Harvey Fierstein and John Travolta. Well, Sam Salem channeled his inner Travolta-in-heels and had the audience roaring every time he came onstage. When I asked my young daughter what she thought of the show her response was (and I quote): “He was so funny, he should win a thousand-dollar prize for how good he is.” While I am not personally able to award this prize, I share my daughter’s enthusiasm!

Maya Gensler and Lance De Leoz were a joy to watch as Penny and Seaweed. In the character of Seaweed, Motormouth Mabel’s son who teaches Tracy some dance moves and joins her integration efforts, De Leoz showed himself to be a consummate performer. His dance moves were superb and he had the singing and acting chops to match.

All in all, this production was first rate. Congratulations to everyone involved. I look forward to the next Ovations production. To quote my daughter once more, “My hands got numb from clapping so much!” 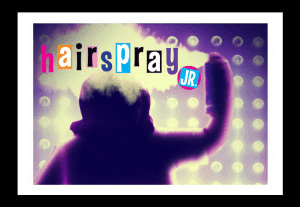 Hairspray, Jr.played through April 23, 2017 at Ovations Theatre performing at the Kreeger Theatre at the Bender JCC of Greater Washington – 6125 Montrose Road, in Rockville, MD. For information on upcoming events, visit their website.