Theatre-lovers searching for a sequel to Doubt—John Patrick Shanley’s prize-winning (and frequently revived) play about nuns and priests in an Irish-American enclave of New York—will be surprised to find that Outside Mullingar is as far away from the Bronx as a ballad is from rap.

In fact, Outside Mullingar—now having its DC premiere at The Keegan Theatre—might be considered a prequel to Doubt. Set in roughly the same time period, the characters in this play are the Irish relatives who didn’t emigrate to America when Shanley’s own father did.

In the hands of Keegan Founder and Artistic Director Mark A. Rhea, the result is a lyrical, heart-wrenching, and ultimately joyous tribute to those who stayed behind, tending the land that they loved. And the land, in this play, is as much a force as any of the characters on stage.

Outside Mullingar is a love story about the pull of the land as well as the push and pull of a few maddening people. Brandon McCoy is Anthony Reilly, the bachelor son who bumbles about, unable to speak for himself or fight for what should be his.

Susan Marie Rhea is Rosemary Muldoon, the woman who, like generations of Irish spinsters before her, pines for a suitor who is presumably unavailable. She smokes cigarettes (and even pipes) in the barn, and horrifies her mother when she announces that she’s frozen her eggs.

When the curtain rises, these two are overshadowed by their widowed parents, two Keegan veterans whose repartee lights up the stage even before the whiskey begins to flow.

Kevin Adams plays Tony Reilly, Anthony’s father, with an Archie Bunker-like belligerence. He is the ultimate rejecting parent, toying with the idea of disinheriting his only son.

Rena Cherry Brown is Mrs.Muldoon, mother of Rosemary. Petite but formidable, she is the essence of propriety, her face and body language speaking volumes as she scans the dirty dishes in the Reilly sink. Yet she intends to leave her property to her only remaining child. And she expects Reilly to do the same.

The Muldoon farm, however, is right next to the Reilly one. The two are separated by a right of way that the Reillys sold to the Muldoons some 30 years before. Like the characters in a situation comedy, these two have been fighting about it ever since.

While the parents dominate the first act, the tables are turned—as they are in real life—when the older Reilly and Muldoon are gone, leaving the quarrel behind. Anthony, now called Tony, and Rosemary, now suffering from nicotine withdrawal, pick up the cudgel.

It is in the second act that these two—the would-be lovers and inheritors of the land—come into their own, engaging in a battle as raw and desperate as only an Irish passion can be.

So different are the two acts that some might question whether they belong in the same play. Yet for me, the two are inseparable. The squabbling and ribaldry of act one combine to set the stage for act two, which is equally funny, but on a different scale. It is as though the characters had gone through a blender, emerging as more realized versions of themselves.

One of the most extraordinary scenes in the play is the one where father and son, both lying on the father’s death bed, are able to each give the other the acceptance both badly need. The scene, played to perfection by the two actors, is the catalyst for the drama that ensues.

The sight and sound of rain, coming down so heavily at times that being in the theatre felt like cowering at the heart of a storm, is the result of Patrick Lord’s brilliant projection design, highlighted by Dan Martin’s very dramatic lighting effects.

Matthew Keenan’s set design is spare—as a modest farmhouse should be—but evocative, thanks to Cindy Jacobs, who has juxtaposed an ancient cast iron stove against a modern painted-top sink. All the pots and pans, dishes, and kettle, tea cups (for hiding the whiskey, of course) bespeak the lives of the inhabitants.

Off to the side, shrouded in darkness most of the time, is the barn where Rosemary smokes.

The sound of Irish ballads—love songs, mostly, accompanied by a countryman’s fiddle—is the work of Tony Angeli, a composer who has been the Keegan’s resident sound designer for more than 15 years.

Outside Mullingar is a jewel of a play, best displayed in the intimacy of a theatre like Keegan. It is not a very physical play, though Stage Manager Alexis J. Hartwick has done a fine job keeping the characters and the struggle itself in motion. Think of it as an Irish adaptation of Chekhov.

The writing is beautiful. Shanley, who is now 66, has an ear for language and an understanding of the value of understatement. He wrote the play right after his 60th birthday, following his visit to the family farm that his father had left many years before. First produced on Broadway in 2014, it has since been seen in Seattle and Los Angeles.

Though best known for Doubt, which received both a Pulitzer for Drama and the Tony for Best Play in 2005, Shanley has written more than 40 other plays, plus screenplays, and an opera. His first major commercial success was Moonstruck, the 1987 Hollywood movie about a Brooklyn widow who finds romance in an unlikely place.

Outside Mullingar is Shanley’s first play to be set in Ireland. It will be at The Keegan Theatre for just a few weeks, so I urge readers to grab this opportunity to see a beautifully-wrought play by one of our leading playwrights. 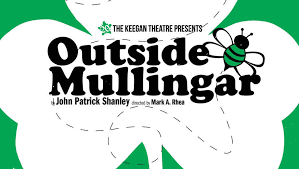