In conjunction with their last show of the 2016/17 season – the classic farce, Noises Off – Everyman Theatre is partnering with Stoop Storytelling to present a night of side-splitting stories about the real-life blunders and behind-the-scenes hijinx of the Baltimore theater community. The Show Must Go On! will feature some of Charm City’s favorite theater artists, telling true stories about the unpredictability of live performance:

Everyman Theatre Founding Artistic Director and Noises Off director Vincent M. Lancisi took a few minutes away from rehearsals to answer some questions about The Show Must Go On!

Patricia: How did this partnership between Stoop Storytelling and Everyman Theatre happen?

Vincent: You can’t love great stories in Baltimore and not be a fan of Stoop Storytelling. We’ve been having ongoing conversations with Jessica and Laura for quite some time, just looking for the right time and opportunity to partner. Since the moment we announced Noises Off, our actors and the entire Everyman team, really, have had a ball swapping untold stories from past stage experiences gone haywire – it turned out that this was just the perfect excuse for us to work together. The theme, the title, everything really just went from there and wrote itself, inspired by Noises Off. So while we’re busy rehearsing Noises Off, the Stoop Storytelling team has been doing a fabulous job engaging actors and performers from throughout the greater Baltimore theatre community, and together we’ve assembled a program that’s just SO funny that you know these stories must be true. The storytellers will inhabit the Noises Off set during our first night off from performances. It’s going to be a hoot!

The Show Must Go On! event is more than the stories. What else does the evening hold?

Like most everything we do here at Everyman, it’s about creating a sense of community and interaction. The show will begin at 7:30pm, but we’re opening the doors at 6:00pm so that guests can join us for happy hour, with live music from a local band, The Slanted Sound.

The Show Must Go On! is only one in a series of events associated with Noises Off. What else does Everyman have planned?

Oh yes, there is a LOT happening – from TNT (May 16), a night where teens come to see the show and enjoy food and conversation with members of our artistic team to Taste of Everyman (June 1), a food-and-drink experience paired to match the show, then also the World of the Play panel discussion, for audiences attending performances on June 3, and lastly, our Cast Conversations (June 8), where audiences can mix-and-mingle with our Resident Company after the show. Plus, we’ll host our final Salon of the season, a staged reading of Trouble In Mind – a different take on a behind-the-scenes setting – on June 5. It’s really a fabulous conclusion to our 2016/17 season! 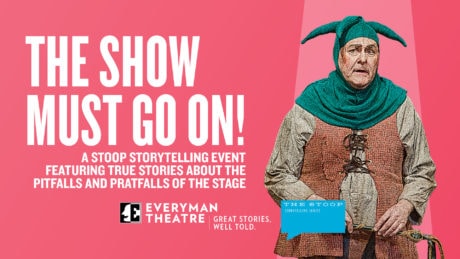 Tune in tomorrow for part two of our The Show Must Go On! Preview – an interview with The Stoop Storytelling co-founder, Jessica Myles Henkin.