It’s taken five years for The Father—the highly-acclaimed drama by Florian Zeller that shook Paris in 2012—to arrive in the Washington area.

But now that it’s here—following sold-out performances in London and New York—this stunning puzzle of a play has settled in for a month-long DC debut at Studio Theatre, where audiences lucky enough to get seats will gasp at the audacity of this production.

Commanding the stage throughout is André, the octogenarian father of the title, who is forced, because of declining health, to be “looked after” by a series of strangers, one of whom happens to be his daughter.

Played by the extraordinary Ted van Griethuysen—a giant of the American theatre for 55 years and the actor who just this week was awarded the Helen Hayes Awards Tribute for a lifetime of work—this father figure is as cantankerous as they come.

His bearing—even when dressed in pajamas or sunk in his chair—is as regal as Lear’s and as irascible as Falstaff’s, both of whom he has portrayed at theatres here and abroad.

In fact, critics have compared the role of André to Lear, though the former is funnier.

And who is André, you might ask?  Well, it depends on when you ask. Or who is aasking.

If the questioner is a pretty young woman, then André might modestly reveal that he was once a dancer. And then demonstrate with a tap dance routine reminiscent of Fred Astaire.

Alternatively, he might have been a circus performer. Or an engineer.

The apartment in which he lives could be his.  Or it might be his daughter’s.

André rules this world—or tries to rule it—from a throne that resembles a Le Corbusier chair. It is part of a set designed by Debra Booth, whose most recent design was a shanty in Blood Knot.

Here, she has created the living-dining area of an upper-class apartment in Paris. It is consummate class, a place where ‘Danish Modern’—complete with its teak dining  able and black leather chairs—has never gone out of style.

The play opens with André in his ubiquitous chair, fuming over his missing watch. His daughter, meanwhile, is furious over the fact that yet another caregiver has quit the job.

André, in a series of wily whispers, reports that his watch has been stolen. (The secrecy is because the perpetrator might be listening from behind one of the doors.)

Anne, the daughter, will have none of this. She points out that her father has simply forgotten where he put the watch, then extricates it from its “secret” place.

Kate Eastwood Norris—last seen as the powerless Rachel in Animal—delivers a beautiful performance as Anne, imbuing her with a patience that nearly cracks as André becomes increasingly belligerent and unhinged.

Other characters who drift in and out of the apartment include Anne’s former husband, played by Daniel Harray. Since he doesn’t seem to know that he has been divorced, the husband is unfazed by Andre’s behavior. He arrives with a chicken and proceeds to cook it. Periodically, they sit down to eat.

Then there is Pierre, who describes himself as Anne’s live-in partner. Played by Manny Buckley, Pierre is not patient with Andre’s confusion. In fact, he is really annoyed.

While both the husband and the boyfriend are dressed identically—a brilliant touch by costume designer Wade Laboissonniere, who has also outfitted the two Anne characters in identical sweaters—it is Pierre who regards André as an intruder.  He sows terror when he whispers the word “institution,” urging Anne to put her father away.

Erika Rose is another of the strangers invading André’s world. She switches easily between roles, displaying wry humor as she appears sometimes as Anne and sometimes as a nurse.

Caroline Dubberly is Laura, the new caretaker hired to replace the one that just left. She approaches her charge with bubbly enthusiasm—delighted with the tap dance performance and happy to share a drink with her patient, even if he’s in pajamas—then recoils from his cruelty.

The Father unfolds in a series of vignettes, each one a fragment of a past that may or may not have existed. Keith Parham and Ryan Rumery are responsible, respectively, for the exploding lights and thundering piano chords that separate each scene of alternating reality

Like the characters who come and go without warning, the disappearing watch is a recurring joke in this play, evoking laughter even as the scene grows progressively darker.

The watch is a symbol of time. Not time past, as in Proust, but time lost. Forever. André is losing not just his mind but great clumps of the past. He is succumbing to an illness that erases memory, leaving him unable to recognize the people around him or the signposts of his own existence.

Without memory, all sense of identity is gone. André, before our very eyes, is losing the thread that connected him to the outside world. He likens himself to a tree without branches or leaves.

The author of this extraordinary play is Florian Zeller, who—at the ripe old age of 36—is still the boy wonder of contemporary French theatre.

Although he started out as a novelist, writing three best-selling works of fiction while he was in his early 20s, Zeller caught the theatre bug when, at 23,  he was commissioned to write an opera libretto. He’s been writing for the stage ever since, at the rate of one play a year.

The Father (Le Père) was an immediate hit, running for three years in Paris and receiving France’s top honor, the Molière award, for best play in 2014.

Two-time Tony Award winner Christopher Hampton, who wrote both the original drama and the screen adaptation for Les Liaisons Dangereuses, is the gifted translator, and Lauren Halvorsen is the dramaturg.

Zeller himself refers to The Father as a “tragic farce,” and there are farcical elements throughout, including the Feydeau-like comings and goings through the two doors. Familiar faces pop in and out, constantly surprising Andre, who is trying to exercise some control over his shifting world.

While the play itself is the star of this production, much credit for its lightning speed and breathtaking changes of character and scene belongs to David Muse, who is now in his seventh season as Artistic Director for The Studio Theatre. Working with Sarah Elizabeth Ford and Victoria Gruenberg, Muse has devised a world in which one has to laugh, even though tragedy lies between the lines.

Here are some of the lines, taken from the opening of the play, in which André ponders the missing watch:

What happened?
Nothing happened.
What?
Nothing.

It’s Pinter-esque, perhaps, with hints of Pirandello. But in the end, it’s all Zeller.

The Father, which opened on Mother’s Day this weekend, is one of the most daring new plays to hit the local scene this season. It is a fitting conclusion to this year’s Main Series at Studio. 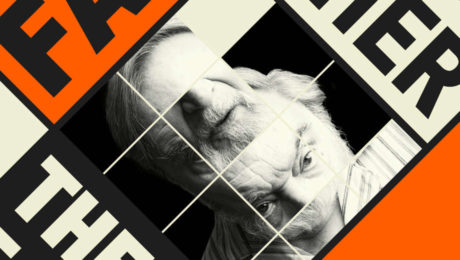