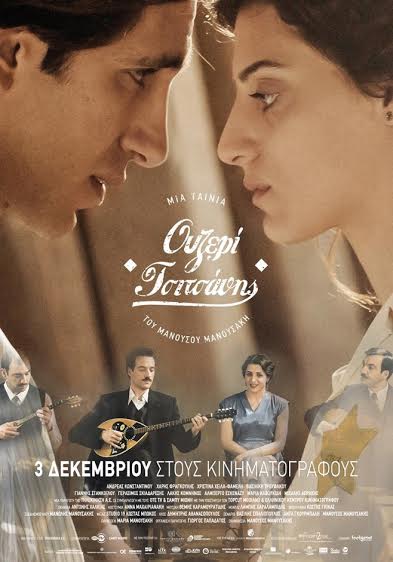 In most wartime films, the plot lines tend to not feature one thing: a romantic story. This is done to keep more emphasis on the action scenes. Director Manousos Manousakis attempts to combine these elements in his film Cloudy Sunday, with mixed results.

The story takes place during World War II  in the Greek city of Thessaloniki. The city has been under German occupation, making it an undesirable location for the city’s Jewish population. As time passes on, more and more restrictions are placed on the Jewish resdents. At the heart of the conflict is a brewing resistance movement. One of the resistance members is Yorgos Samaras (Haris Fragoulis), a Christian carpenter and café worker. His resistance work brings him in contact with Estrea Beza (Christina Hilla Fameli), a Jewish girl who assists Yorgos in typing radio messages for the resistance. The two gradually fall in love, a love that is deemed forbidden by their family and friends. Their love is put to the test as the conditions worsen for the Jewish people of the city.

At first glance, Manousakis borrowed components of Romeo and Juliet and put them in a war drama. Two lovers on opposite sides of society, their relationship looked down upon by their respective groups and doomed to fail. It’s a promising concept, but is slightly flawed in its initial pacing. The romance between Yorgos and Estrea was rushed at the start as they fall in love after only two, maybe three, on-screen meetings. The encounters also don’t feature much meaningful conversation or actions that would suggest a possible romance.

Another problem is the film’s choppy editing. One example is a scene where the resistance stages a raid on the German armory. During the ensuing firefight between the resistance and Germans, quick cuts are over-utilized, making it hard for me to get my bearings during the action.

There are other instances in the film where scenes lose effectiveness because they end rather abruptly. One such example is when Estrea and her mother (Maria Kavoukidou) learn the truth about the forced labor camp their relatives have been sent to. An escaped prisoner explains how the camp operates and then the scene just ends with a cut to another scene. The audience can’t properly grasp the gravity of the situation because they aren’t given time to.

Despite these issues, the casting is superb. Fragoulis and Fameli star as the doomed lovers but Fameli is the standout of the duo. She brings dimension to Estrea, a conflicted woman who wants to love an outsider, but fears how it would affect her relationship with her family.

Another great performance is delivered by Andreas Konstantinou as Vasilis Tsitsanis, a musician whose café is frequented by resistance members and other locals. Vasilis is also one of the more fleshed-out characters in the film. In troubling times, he finds solace in his music and uses it to soothe his wife and infant child. He develops feelings for his new café singer (Vasiliki Troufakou) but fights his desires because of his devotion to his family.

Troufakou is the standout of the supporting cast. She plays Lela, a singer who gains employment in Vasilis’ café. Over the course of the film, Lela undergoes a transformation that is exhibited through Troufakou’s outstanding range. She begins as a singer who becomes enamored with her employer, hoping he will return her affections. When her dream doesn’t come true, she decides to trade in love for financial security, a decision she later comes to regret.

I really enjoyed the film’s wonderful score. Composed by Themis Karamouratidis, the sounds of the Greek guitar lends an authentic feel to the film’s setting. The music is also utilized quite effectively in certain scenes. Karamouratidis creates an ominous tone in a scene where Yorgos’ carpentry shop is searched for contraband by the Germans. As a German draws near a spot where Yorgos has a gun hidden, the score crescendos to create a sense of unease.

The film features a handful of other noteworthy moments such as the selection scenes where a black-hooded man randomly chooses people to be taken away, some small scenes in the café that showcase Vasilis’ musical talents, and the surprise ending.

Cloudy Sunday will have its second screening during the Washington Jewish Film Festival tomorrow, Monday, May 22, 2017, at Bethesda Row Cinema – 7235 Woodmont Avenue, in Bethesda, MD. However, tickets are now sold out for the screening. A rush line will be available at the venue one hour prior to the start time where you will have the opportunity to wait in line and purchase tickets as they become available.

TheWashington Jewish Film Festival Festival continues through May 28, 2017, at the following theaters: AFI Silver Theatre, Bethesda Row Cinema, E Street Cinema, Edlavitch DCJCC, National Gallery of Art, and TWO JEWS WALK INTO A BAR (And a Deli). For tickets, purchase them either at the theater box offices or online here. You can also find a schedule and further information of the remaining films in the festival here.