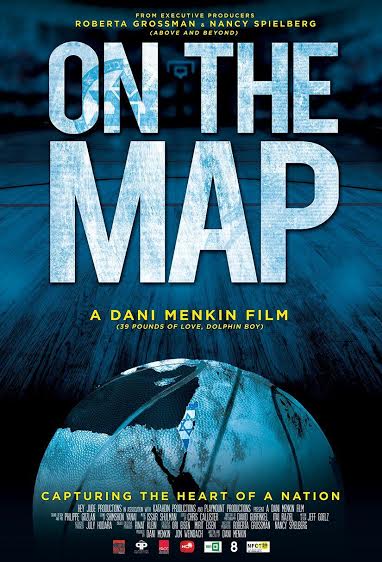 Everybody loves an underdog story, especially in the world of sports. Some of these stories are well-known likes The Miracle on Ice. But, sometimes, the best stories can be the ones you’ve never heard before. Such is the case with Dani Menkin’s marvelous documentary On the Map, a look into the 1977 Maccabi Tel-Aviv basketball team that defeated the four-time defending European championship Soviet Union squad.

In 1977, Israel was recovering from the effects of the Yom Kippur War a few years earlier. The country was aching for a ray of sunshine after years of darkness. Their prayers were answered in the form of a ragtag basketball team. The team was comprised of both Israeli and Jewish American players, some of whom struggled to make it in the NBA. In the European Cup Championship tournament, they faced the four-time defending champion Soviet Union team. Against all odds, they defeated the Soviets and went on to even greater achievements.

The story of the basketball team is brought to life through insightful commentary from the players themselves. Their colorful anecdotes about their teammates and experiences also provide some nice comedic moments. Commentary is also provided by NBA Hall of Famer Bill Walton, and former NBA Commissioner David Stern.

One of the best things about Menkin’s documentary is how he manages to tell multiple stories within one subject. The first story, and the most inspiring of the film, is Tal Brody. Here is a young man who passed an NBA career to go to Israel to play for Maccabi Tel-Aviv. He then decided to put off retiring in 1977 to help the team win a championship. Viewers will feel awed by Brody’s story, even more so as the film continues.

Another player that is given a good dose of exposure is Aulcie Perry. Perry was an NBA camp cut, looking for a place to play. He was brought to the Maccabi Tel-Aviv team and not only found a team, but an identity. Perry was so inspired by the country of Israel and its people that he studied with Rabbis and eventually converted to Judaism. Perry is another great example of how Menkin weaves smaller stories within the larger confines of the documentary. Perry’s interviews also bring some of the comical moments in the film.

Menkin also succeeds to conveying not just the importance of the game in sports, but on a political stage as well. This comes through interviews with various political activists and newsreels. In the 1970s, the Soviet Union was not on good terms with Israel. They even refused to play them in the European Cup Championship. The game itself and the Maccabi Tel-Aviv team’s victory was a major turning point for the country of Israel, a turning point whose importance is felt through the testimony of the players and other commentators such as journalists and others. You also feel its power when Brody gives his famous quote: “We are on the map. And we are staying on the map – not only in sports, but in everything.”

One of the most memorable moments from the documentary comes during the game against the Soviet Union. As the documentary plays the game film, the scene shifts to the Maccabi Tel-Aviv team watching the game in present day. The players chide each other when they make mistakes and celebrate when they watch themselves score points. The scene also includes the wife of late player Jim Boatwright watching her husband sink a three-point shot the game footage for an added touch of emotional power. The scene also benefits from some effective editing during the game’s final seconds. The scene cuts from the game, to the players, to Boatwright’s wife as the game winds down. You feel their joy as the team celebrates their victory amidst a swarm of fans on the court.
After their victory, Tal Brody proclaimed: “We are on the map.” Thanks to Dani Menkin, this amazing film is also on the map and should be on the map of sports fans and moviegoers everywhere.

On the Map received two screenings during the Washington Jewish Film Festival. The first screening was on May 23, 2017, at the Edlavitch DCJCC – 1529 16th Street NW, in Washington D.C. The second screening was on May 24, 2017, at Bethesda Row Cinema – 7235 Woodmont Avenue, in Bethesda, MD. Both screenings allowed audiences to participate in a live auction to bid on a basketball autographed by both Tal Brody and Director Dani Menkin. Special limited-edition, signed movie posters were also included in the auction. Proceeds benefitted the Washington Jewish Film Festival and distribution of the film.

The Washington Jewish Film Festival continues through May 28, 2017, at the following theaters: AFI Silver Theatre, Bethesda Row Cinema, E Street Cinema, Edlavitch DCJCC, National Gallery of Art, and TWO JEWS WALK INTO A BAR (And a Deli). For tickets, purchase them either at the theater box offices or online here. You can also find a schedule and further information of the remaining films in the festival here.