A good American farce is as rare as a diamond. If you can write a crazy comedy that will keep audiences laughing, regional and community theaters will beat a path to your door. Ken Ludwig, oft-produced creator of Lend Me a Tenor and Crazy for You, has outdone himself with Shakespeare in Hollywood. Here is a satiric farce that you will remember fondly tomorrow morning.

Ludwig obviously knows and loves his Shakespeare. Half of the play is quotes (or near-quotes) from the bard. The other half is the crackling, speedy barbs of 1930s screwball comedy. Only a brilliant farceur could combine these two.

The setting is Hollywood in the mid-thirties. Warner Bros. Studio, famed for their backstage musicals and gangster films, is making A Midsummer Night’s Dream, not with experienced Shakespeareans, but with contract movie stars such as Dick Powell, James Cagney, and Mickey Rooney. Directing this sure-to-flop oddity is the greatest and most famous European stage director, Max Reinhardt. The most ridiculous part of all this is that it actually happened.

Enter Ken Ludwig. As he tells it, Jack Warner, head of production, is forced to produce Dream because his sexy actress/mistress demands a “prestige” picture. Since Shakespeare’s play is filled with magic, Ludwig adds his own. Puck and Oberon, the fairies of the play, find themselves not in Athens, but on the Hollywood set of the film. After discovering the wonders of such modern delights as Coca-Cola and waffles, they are seduced by the “hot chicks” and extravagant lifestyle, not to mention the money and celebrity that comes from something called “movies.” Antics ensue, including those magic flowers, mistaken love potions and all the lunacy of Shakespeare’s play.

What sets Shakespeare in Hollywood above the average farce is the satire. The fatuous and grotesque Louella Parsons (skillfully played by Rhonda Goldstein) is surprised when she interviews the appropriately dour Max Reinhardt (Joe Tranchitella).

Parsons: What brings you to the United States?

Reinhardt: … is funny story. There is a man in my country named Hitler who is killing people.

When Jack tells the other Warners that he is producing Shakespeare, they demand to know when this new guy will show up to do rewrites. This continues for a delectable two hours.

Director Yaga Brady has fielded a cast equally skilled in screwball and Shakespeare. The poetry is beautifully handled by Jim Broyles (as Oberon), Joshua Keiter (Puck) and Neena Boyle (Hermia). They are ready to step into any play by Shakespeare anytime. As for screwball, we have Geremy Webne-Behrman (as Dick Powell), Patrick Cathcart (Joe E. Brown) and R.O. Scott (James Cagney), who are befuddled by this assignment and eager to return to their more popular genres. T.J. Deluca (as Jack Warner) is a lusty, cigar-chomping megalomaniac, while Anna Pysher adds the hot sauce as his available girlfriend.

This production is not filled with impersonations; the actors capture the essence of Cagney and Brown without the mannerisms. But there is one brilliant exception. Jeff Ragan seems to have stepped off the Vitaphone screen with his dead-on Will Hays, the former postmaster elevated to the exalted position of Hollywood censor. He is the villain of the piece, as he demands that Dream be stripped of all traces of “bestiality.” 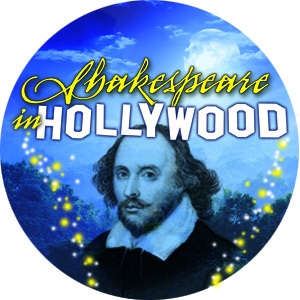 The required acting style of Shakespeare in Hollywood is “overplayed sincerity,” which director Brady has obtained from the entire cast.

The laughter came hardest from my side of the house. Farce, satire and Ken Ludwig can’t be beat.