Annapolis Summer Garden Theatre’s production of Sister Act, directed by Clare Shaffer, is a funny spectacle of a musical. Based on the movie starring Whoopi Goldberg, with music by Alan Menken, lyrics by Glenn Slater, book by Cheri and Bill Steinkellner, with additional book material by Douglas Carter Beane, it combines wonderful music and singing with excellent directing, lighting, costumes, and set design – a perfect way to kick off the theater’s 52nd season.

Kanysha Williams plays Deloris van Cartier with great humor and high energy, as well as a wide range. Her opening number “Take Me to Heaven” is a fun, toe-tapping song; as one character remarks, “it has a great beat and you can dance to it.” Williams throws herself into all her songs, dancing around the stage and filling it with her joy. “Fabulous, Baby!” is a testament to her ambition – her passion to become a star leaping from her voice. She can also do emotional songs too;  the song “Sister Act” is a powerful, heartfelt ballad to her true calling. Despite the deep feeling, it’s one of the quieter songs in the musical, her voice providing the most powerful instrument.

She especially shines after joining the convent and encountering the nuns, who give her plenty of material for comic lines and timing. She does a hilarious improvisation of the Lord’s Prayer, incorporating parts of the “I have a dream” speech, “The Star-Spangled Banner”, and other sources. Her reaction to the nuns’ off-key singing is equally priceless: “There are no words.”

The nuns are a real hoot. Traci Denhardt plays Mary Lazarus as the feisty choir director, always with a quip; she gets funky in several of the numbers. Kylie Airin Sjolie plays Mary Patrick as bubbly, innocent, and energetic, always up for fun, even following Deloris to a bar. Rachel Perry plays Mary Robert, the youngest of the group. Quiet and stooped over, she rarely gets a word in edge-wise. She sings out beautifully in “The Life I Never Led,” crying out in her yearning to brave her fears and explore the world.

They all come together wonderfully in several songs, including “Raise Your Voice,” where Deloris teaches them how to sing, “Sunday Morning Fever,” which has them grooving on the stage to such lines as “Shake it like Mary Magdalen,” and “Bless Our Show,” a softer benediction of sorts where they pray for a good performance. In “How I Got the Calling,” they all hilariously explain how they ended up in the convent; Deloris remarks that she attended “Our Lady of Perpetual Ecstasy”. They have a great comic moment taking on Deloris’ pursuers, and a beautiful show of solidarity with her.

Debbie Mobley brings a gruff exterior over a tender heart to the role of Mother Superior, viewing her encounter with Deloris as a test. In “Here Within These Walls” she sings of the safety of the convent against the depravity of the outside world, which Deloris represents in spades; taking out contraband from Deloris’ bag, she disparages her life choices. “I Haven’t Got a Prayer” is a pleading prayer in what seems to be a losing battle against the outside world, ending in exhaustion and resignation.

Theodore Sapp plays Curtis, Deloris’ gangster boyfriend, with a quiet menace. Domineering, he waves her over to hug him after prodding a reluctant “thank you.” He gives “When I Find My Baby” a strange mixture of romance and disquiet. Feeling like a love song at first, it describes how intimately he knows Deloris, while also explaining what he’ll do to her when he finds her. Kyle Eshom, Jeff Hawkins, and Daniel Santiago as Curtis’ underlings TJ, Joey, and Pablo add a comic turn to his sinister element. Their song “Lady in the Long Black Dress” is a funny commentary on their power to charm any woman, even a nun. Striking seductive poses, they unbutton their shirts and show off their features, giving a little male eye-candy.

Greg Jones Ellis gives great physical comedy as the Monsignor. Solid and demure at the beginning, he becomes a flashy DJ as the music entrances him, dancing out into the aisles after introducing the choir.

Josh Mooney plays Eddie, Deloris’ cop friend, with a shy, innocent demeanor. Always carrying a handkerchief from a childhood nickname, he charmingly stumbles in protecting Deloris. In “I Could Be That Guy,” while dancing like John Travolta and Elvis Presley, he sings of his desire to be the smooth-talking tough guy who always gets the girl. There’s a touching moment towards the end when he and Deloris grow closer, with him affectionately stroking her hand.

April Joy Vester has done a wonderful job as Set Designer, creating a simple but effective set. Five panels resembling stained glass take up the stage, with brick walling on the other side to represent a nightclub, bar, or bedroom.
Kaitlyn M. Peacock has done great work as Lighting Designer. The lights help set the mood, making the comic scenes lighter and the serious ones more intense.

Lin Whetzel works well as costumer. The nuns’ habits all look appropriately religious. Deloris’ club outfit is a sparkly beige dress, with big purple boots and a handbag. Both the Monsignor and Mary Lazarus wear cool sunglasses at one point. Eddie has two creative costume changes during his number.

Paige Rammelkamp as Music Director and Clare Shaffer as Director have done excellent work. The actors move around the stage easily and naturally, and sing with joy and energy. They work well with the musicians behind the stage, lyrics and music blending together harmoniously. Everything comes together for an enchanting evening of musical comedy under the stars that will have you clapping along in the end.

Running Time: 2 hours and 45 minutes, with a 15-minute intermission. 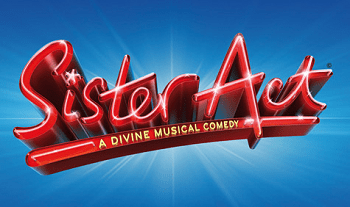