Dreamgirls, with book and lyrics by Tom Eyen and music by Henry Krieger, was one of the very first shows I saw on Broadway, back in the 1980s. It was memorable then and it remains memorable now in the boisterous and emotional production presented by ANKH Repertory Theatre and The Finest! Performance Foundation and performed at the Gaithersburg Arts Barn.

The story, a fictional retelling of the rise of Diana Ross and the Supremes, is filled with music that will stick in your head for days and force you to put the soundtrack on Spotify on repeat. The musical contains hits such as the title song, “Dreamgirls,” as well as “Move,” “One Night Only,” “Step into the Bad Side,” and, of course, “And I Am Telling You I’m Not Going” – a powerhouse of a song that brought the audience to its feet.

Each of these songs require outrageously talented singers and actors to make them come alive, and the production delivers with a young cast that is fully up to the challenge of the difficult roles. The three main parts of this production are double-cast and I was fortunate enough to see Linaé Bullock, Azaria Oglesby, and Tanea Johnson in the roles of Deena Jones, Lorrell Robinson, and Effie White, respectively. All three were perfectly cast for their roles, creating multi-faceted characters that you could sympathize with in one scene and detest in another. And, oh, the singing! All three women are incredibly good singers, both individually and as a group, with incredible harmonizing and strong solo performances.

Another cast highlight was the performance by Edward Byrd as James “Thunder” Early. Mr. Byrd was the exact amount of outrageous the role demands, bringing excellent acting and an incredible voice to the role of the seasoned singer about to eclipsed by his backup singers. Jason Ellis as Curtis Taylor, Jr., the groups manager, and Tyrell Martin as C.C., the group’s songwriter, also added emotional depth to the story.

One constraint of this performance is the size of the stage at the Gaithersburg Arts Barn, which is rather small. While the director/choreography team of Kashi-Tara and Kelly Chauncey do a lot with the small space available, the actors would have benefited from more room. Another challenge this production faces are the many scene changes. There are 12 different locations in the first act alone and the transitions between scenes often seemed unusually long, making the overall flow of the show lag a little. 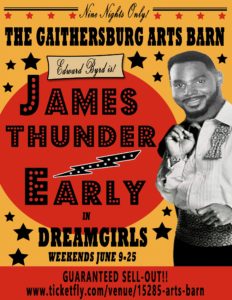 The costumes, designed by Karen Rawlins, were spectacular. In each scene, I was excited to see dresses and wigs that both represented the era and enhanced the production. From the sweet dresses worn by the Dreamettes in the first scene to the sophisticated gown worn by Deena Jones in the last scene, to virtually everything worn by James Early, it was a treat to see such innovative and beautiful costumes throughout the show.

I wasn’t a fan of some of the lighting choices made by directors. In “Step into the Bad Side,” the stage was kept dark and lit with red lights, adding to the mood of the song but making it difficult for the audience to really see the actors. In the duet, “When I First Saw You,” the lighting was sometimes completely on one character, leaving the other in darkness.

This production is lucky enough to have musicians Joshua Sommerville, Levi Terrell, and Donovan Pope accompanying them throughout the show. The live music adds a lot to the production value and, with the quality of the singing, making the entire production feel much more immediate and the sound fuller, adding to, but not eclipsing the wonderful singing.

All in all, Dreamgirls is a production you won’t want to miss. The stage is small but the voices are huge, so get your tickets to Dreamgirls at the Gaithersburg Arts Barn now. 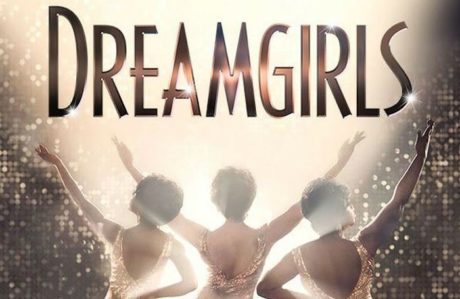 Dreamgirls plays through June 25, 2017 at ANKH Repertory Theatre and The Finest! Performance Foundation performing at the Gaithersburg Arts Barn – 311 Kent Square Road, in Gaithersburg, MD. For tickets, call (301) 258-6394, or purchase them online.