In 1972, there was no Roe v. Wade or Violence Against Women Act. Battered women had little legal recourse, and many found shelter—if they were lucky—in safe houses run by good Samaritans. House of Cards writer Sarah Treem’s When We Were Young and Unafraid is a searing drama about a woman who runs such a safe house. Director Marie Byrd Sproul’s production at The Keegan Theatre unflinchingly confronts these issues, telling the story of victims who aren’t perfect, caretakers who have their own past, and abusers who didn’t spring from their mother’s womb as monsters.

It is nearly dawn at a small inn on an island off of Seattle. Stoic, stone-faced Agnes (Sheri S. Herren) comes downstairs to find her daughter, Penny (Kaylynn Creighton), plugging away at a school assignment. They are bickering in the way of parents and teenagers when the doorbell rings—not the front door, but the neatly hidden door at the back that is used only for specific guests. Agnes and Penny spring into action, setting up a room for the new arrival, Mary Anne (Jenna Berk), who is sporting a black eye and a nasty cut on her forehead. Mother and daughter have done this many times before, but that does not make it easier for Mary Anne to process. After settling in, she is forced to confront her own inner demons about a man she has loved since childhood, all the while helping college-bound Penny woo the captain of the football team. But it soon becomes clear that this is no ordinary day at the inn: these women will change each other’s lives forever.

Nora Achrati portrays Hannah, who appears on Agnes’s doorstep looking for work and refuses to take “no” for an answer. She is decidedly not on the run from a man; in fact, she is on her way to join a community of lesbian separatists called the “Gorgons.” Rife with street slang and brash declarations, she acts a counterweight to the rigidly practical Agnes and Berk’s emotionally volatile Mary Anne. Theo Hadjimichael rounds out the cast as Paul, the oddball inn guest who invites himself into the women’s lives and becomes fascinated with Mary Anne.

Treem’s play sets most of the action in the kitchen. Characters are constantly eating, drinking, and baking as they interact with each other. In a way, this is perfect: historically, women have been relegated to the kitchen while the action happens elsewhere. In this play, it is clear that life happens in this space—characters make the best attempt to go about their lives until something happens to derail them.

Scenic Designer Matthew J. Keenan’s open, spacious floor plan creates a space meant for both work and community: the kitchen, both doors, the staircase, and the table where Penny works and Mary Anne drinks all converge in this space.

Director Marie Byrd Sproul has done a masterful job of telling this story for women and about women.

Lighting Designer Katie McCreary brings the rustic, homey kitchen to life with her use of warm colors. When characters interact at night, they often use candles rather than harsh overhead lighting. Sound Designer Jordana Abrenica bridges the scenic transitions with a mixture of atmospheric music and dark underscoring, as well as the occasional cover of Beatles songs by female singers. Costume Designer Liz Gossens does a particularly good job of using clothes to tell the story of each character: from the straight-laced, pants-wearing Agnes, to the freer, more butch Hannah, to the traditionalist and man-pleaser Mary Anne.

The play is not without its flaws: some scenes are cut off abruptly in a way that is more jarring than effectively dramatic. And if the intention is to portray Paul as the “nice guy” alternative to abusive boyfriends, this seems problematic, especially given some of his later conversations with Mary Anne.

It is infinitely watchable, leaving just enough room for the audience to make their own decisions in the end. It packs a punch, thanks in large part to the stellar performance of Berk. In a time when we can talk so much more freely about violence against women than we could ever before, in a time where we can exact change, When We Were Young and Unafraid is a great place to start. 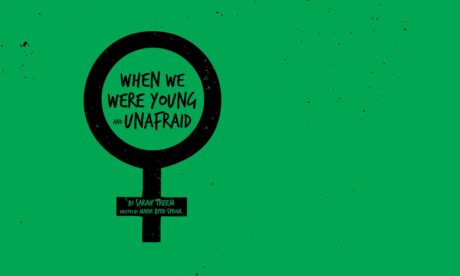