Alex Keiper is a well-known Philadelphia actor who was originally asked to do a solo cabaret show by the Arden Theatre Company. Unexpectedly, she decided she wanted to share this event with some of her talented peers. Ms. Keiper is joined by a cast of mostly women and non-gendered performers in Alex Keiper & the Next Generation at the Arden Cabaret Series at their Hamilton Family Arts Center Studio Theatre. Performers included Madison Auch, Suzanne Collins, Hanna Gaffney, Alina John, Maggie Johnson, Madi Juleskusky, Leigha Kato, Jessica M. Johnson, Jenna Pinchbeck, Pax Ressler, and Bailey Roper.

This cabaret follows the standard cabaret format of “standards” and talk between, except most of the songs are relatively new ones, excerpted from recent musicals and indie/contemporary music. The singers are all unique in style and vocalism, and each has a story to tell. Ms. Keiper requested that each singer choose a song that represents what they would like to share. The stories were much more personal and honest than any I have ever heard told onstage. An underlying theme was that women often have to sing love songs and play roles that are not as varied as male roles. Some of the performances attempted to overcome these limitations with women singing songs originally written for male characters. Others found different ways to go beyond the traditional male/female paradigm.

The songs featured in the cabaret include: “Don’t Rain on My Parade,” (Funny Girl) “Heaven on their Minds” (Jesus Christ Superstar), “Perfect for You” (Next to Normal), “Wait a Bit” (Just So), “Man of La Mancha,” “Who I’d Be” (Shrek, The Musical), “Bad Self Portrait” by Lake Street Dive, “Ocean of War” by Alina John, “Golden Boy,” “Agony” (Into the Woods), “Crazy For You,” “Flight” by Craig Carnelia, “Moving the Line” (Smash), “Someone to Watch Over Me” by the Gershwins, “Out There” (The Hunchback of Notre Dame), “Turned to Stone” by Ingrid Michaelson, “All I Really Want,” by Alanis Morissette, “I Am What I Am” (La Cage aux Folles), and “Closer to Fine” by the Indigo Girls.

All of the performers were committed to their numbers and performed with sincerity and enthusiasm. Ms. Keiper acted as MC, soloist, and back up singer. Her “Crazy For You,” was especially well done and showcased her singing chops. She bravely accompanied herself on the ukulele, which she had learned just for a play. Pax Ressler and Madison Auch doubled as singers and pianists. Kanako Neale played percussion.

My favorites of the evening included “Ocean of War”, “Flight”, “Moving the Line,” “Someone to Watch Over Me” and “Out There.” Alina John composed “Ocean of War” and accompanied herself on the guitar. This song stood out since it was original, and also because of Ms. John’s stirring rendition. She explains that she wrote the song after the deaths of Alton Sterling and Philando Castile. Her light and clear voice was full of heartbreaking emotion. The song reminded me of fado (Portuguese blues) due to the type of guitar picking and its melancholy. “Flight” was a gorgeous duet sung by Leigha Kato and Susanne Collins, whose voices dipped, soared and blended harmoniously. Jessica Johnson brought the house down with her powerful voice and presence in “Moving the Line.” Multi-talented Pax Ressler (musician, dancer, designer, director and composer) was the only low voice of the evening. Ressler’s voice is strong and passionate, and their warm and sentimental rendition of “Someone to Watch Over Me,” often sung by Sinatra and Streisand, was an enjoyable trip, with a few twists and turns, down memory lane. Maggie Johnson blew me away with an intriguing personal monologue and captivating performance as Quasimodo in “Out There.” This Quasimodo possesses an impressive voice and dazzling charisma.

The evening ended with the finale “Closer to Fine” with all the performers. The audience was invited to sing along. Alex Keiper and the Next Generation received a well- deserved standing ovation for their engaging performances and presentation of contemporary musical theatre and popular songs. I heard a lot of refreshing music that was new to me, and I highly recommend this cabaret for those interested in more recent musical theatre as well as in up and coming artists. 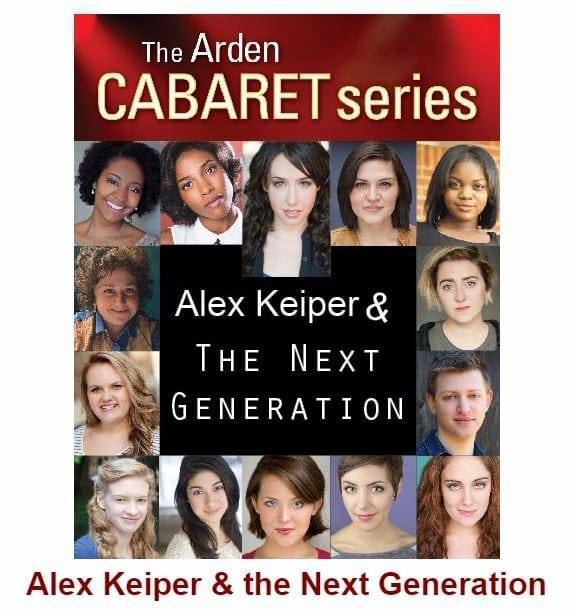 Alex Keiper and the Next Generation plays through June 24, 2017, at part of The Arden Cabaret Series at the Arden Theatre Company’s Hamilton Family Arts Center – 62 North Second Street, in Philadelphia, PA. For tickets, call the box office at: (215) 922-1122, or purchase them online.