Arthur Miller’s 1994 Broken Glass does not rise to the stature of his greatest works (Death of a Salesman, The Crucible, The Price, and others). But even lesser Miller can be arresting, as the smart and sharp production now playing at Theater J demonstrates. Directed by Aaron Posner with precise attention to each pulse beat, given impeccably persuasive performances by its cast of six, and featuring some of the most powerful set and projection design in town (by Andrew Cohen and Mark Costello, respectively), Theater J’s Broken Glass shines a brilliant light that lets us see clearly into the fragile and shattered marriage at its center.

It is 1938, and a Jewish couple named Sylvia and Phillip Gellburg are reacting in very different ways to news of Kristallnacht. Phillip (Paul Morella) has very mixed feelings about being Jewish. He doesn’t hide it. But his snarky remarks about other Jews come from a self-loathing place. Consequently (or coincidentally) what’s going on in Germany 3,000 miles away is of little concern to him. By contrast, Sylvia (Lisa Bruneau) identifies deeply with the Jews who are being brutalized by Nazis. She follows the news closely and has become increasingly distressed. And nine days ago she suddenly became paralyzed below the waist. She can’t walk. She has no feeling down there. Her husband, greatly troubled, goes to consult Sylvia’s doctor, Dr. Harry Hyman (Gregory Livington).

Doctors thought he just had jock itch. Then it spread.

By the end of such articles there’s a surprising diagnosis, often with a good prognosis. At a point early in Broken Glass, I was reminded of that Washington Post series…

His wife suddenly became paraplegic. Her doctor did not know why.

Miller steadily teases out clue after clue in the mystery of what’s disabling Sylvia. And sure enough by the end there’s a diagnosis and an implied prognosis.

Except that Miller leaves us to ponder two different diagnoses, which compete for our credulity as the play unfolds. That Sylvia’s symptoms are psychosomatic (or “hysterical,” as Dr. Hyman explains to Phillip) is established as a given. And Dr. Hyman puts forth the compelling hypothesis that Sylvia’s distraught anxiety about what’s happening to Jews in Germany is the traumatizing trigger. But that’s not the whole story. Upon further investigation—involving intimate time spent with Sylvia—Dr. Hyman and we begin to understand that the etiology of Sylvia’s malady is not only the Nazis but Phillip.

We learn a backstory that includes spousal abuse, erectile dysfunction, and a consequently (or coincidentally) torpid marriage bed. So the Phillip hypothesis stands up—and seems cinched in the final scene shocker. And yet Sylvia’s howl of vicarious pain over the plight of German Jews offers convincing and excruciating evidence that Sylvia’s woundedness is as a Jew.

The two diagnoses don’t ever jibe or cohere. Miller never spells out how Sylvia’s suffering could be simultaneous as a woman and as a Jew, though obviously they are. Nor, for that matter, does Miller explain how the causal source of her suffering could be both her husband and the Nazis (a disturbing parallel, but obviously what Miller meant).

One might have expected a playwright who is herself a woman and a Jew to connect those derogated identities and make them playable and palpable on stage. One might be surprised that here in Broken Glass it is a great man of American letters who has done so. Consequently (or coincidentally) one would have damn good reason to get over to Theater J to see this often overlooked but important Arthur Miller play—if only to ponder the relationship between being gendered female and being Jewish, then and now.

Running time: Approximately two hours and 20 minutes, including one intermission. 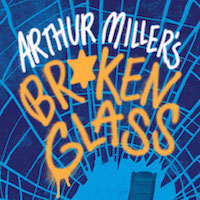