Feeling overwhelmed by the demands of work, everyday chores, and the incessant pings of your digital devices? Then don’t just find the time, but make the time, for getting together, catching up, and relaxing with a few of your closest friends for a boozy weekend brunch. That’s the cordial message of playwright and master mixologist Anthony Caporale’s The Imbible: Day Drinking, another round in his immersive series on the history of alcohol. The latest installment – presented on Saturdays at 2 pm and Sundays at 3, in The Green Room bar of New World Stages – has a book by Caporale, original music and lyrics by Josh Ehrlich, and a selection of serve-yourself pastries, along with three themed cocktails that are guaranteed to lighten your spirits!

Nicole DiMattei (who co-directs with Caporale), Luke Schaffer, Alex Herrera, and Sarah Hinrichsen parody a group of digitally-obsessed over-scheduled New York Millennials in search of a few free hours to enjoy each other’s company while partaking in the popular weekend “cliché” of sleeping in, eating late, and drinking the day away. Along the way, with quick changes into comical costumes, wild wigs, and apropos accents, they transform themselves into a series of current foodie salespeople (“or is it ‘salespersons’?”, asks one of the politically-correct women of Generation Y) and pertinent figures from the past, who enlighten them on the social, scientific, and historic traditions of the meal and its accompanying alcoholic beverages.

Beginning with alternate accounts of the invention and naming of the Bloody Mary in the early 20th century, a presentation of favorite garnishes for the drink and how they are prepared, and the identification of the five basic tastes detected by our tongues (sweet, sour, salty, bitter, and savory – or umami, as it was called by Kikunae Ikeda, the Japanese chemist who first recognized it in 1908), the show is filled with fascinating facts and amusing anecdotes delivered by the cast through dialogue, song, and dance. Closing the first act is a lesson on the development of Irish Coffee, a demonstration of its proper preparation (the beans must be precisely ground and steamed; the cream must be correctly aerated to float on top), and a glimpse into the origins of the consumption of coffee beans, dating back to the story of a 9th-century Ethiopian goat (in a side-splitting portrayal by Schaffer), and then highlighting the different types of Italian coffee drinks in a hilarious Pulcinella-style puppet show and a lively ditty about “Coffee for Everyone.”

The energy and laughs bubble over after intermission, with an effervescent segment on the background of sparkling wines, including the contributions of the real-life 17th-century Benedictine monk Dom Pérignon and the 19th-century French widow Veuve Clicquot (played by the delightful DiMattei) in the evolution of the méthode champenoise and the proper nomenclature for international varieties (Schaffer, as a laughably condescending vintner, explains to his customer that “Spanish champagne” doesn’t exist, because the name can only be applied to those wines produced in the Champagne region of France, then delivers the show’s funniest line about the better taste of women). The ensemble joins together in singing in Italian about the creation of the Bellini – Italian prosecco mixed with peach purée – by Giuseppe Cipriani, founder of the famous Harry’s Bar in Venice, where the cocktail was first served, before distributing the tasty concoction to the audience.

Throughout the time-traveling show, the actors perform Ehrlich’s original a cappella songs with melodious voices and perfect four-part harmonies, referencing the musical styles of barbershop quartets, 1950s doo-wop, and jazz. The engaging production concludes with the ensemble bringing us up to date on the growing popularity and democratization of brunch through the centuries, and some hysterically insightful observations on our age of digital media and internet crowd-funding (I’m still laughing at Schaffer’s explanation, and will be quoting it to everyone I see; that alone is well worth the price of admission).

If you need a break (and you know you do) and are planning a weekend brunch with friends (and you know you are), why not be amused and enlightened while eating and sipping your favorite afternoon drink specialties? The Imbible: Day Drinking provides all the stuff that brunch is made of, so just bring yourself and your BFFs. 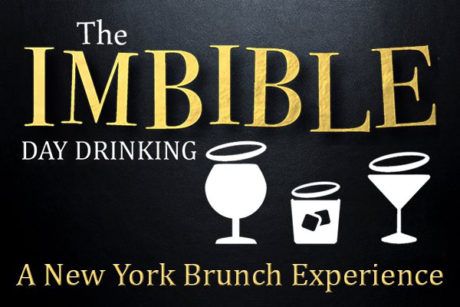