Mike Bartlett’s Contractions, directed by Julia M. Hurley, comes to DC this summer and will be performed at the Logan Fringe Arts Space. This production is presented as a part of the 2017 Capital Fringe Festival, a program of Washington, DC non-profit Capital Fringe. 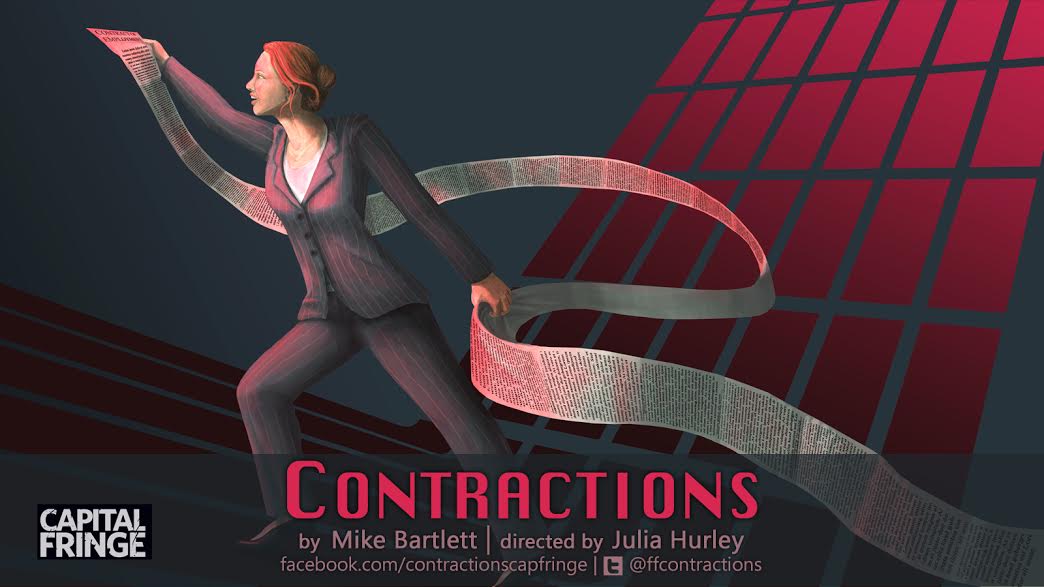 It wasn’t supposed to be like this. Emma finds herself trapped by a web of corporate rules closing in on her life. This ink-black satire poses a question: In a world where companies put their own interests first, how much would you sacrifice to keep your job?

“This show has never been more timely,” states Director Julia Hurley. “The U.S. has always been famous for its pursuit of the American Dream. Anyone can succeed as long as they work hard. But our culture has become increasingly demanding: we are expected to go above and beyond for our work, putting career above all else. With advances in technology, privacy is becoming more and more of an illusion. So what happens when a company chooses to enforce all those clauses you skimmed over when you signed your contract, desperate just to be employed? What happens—as we are seeing more and more in our lives—you are not in control?

“What fascinates me most is that the story occurs between two women. Even after the huge strides women have made in the business world, we are still asked whether we can have it all,” she continues. “The two could not be more different: one, decades older, has clawed her way up the corporate ladder, fighting battles along the way that have left her devoid of compassion for those who have not sacrificed as she has. The other still has hope, and this play boils down to the choices she makes in order to survive in this world. With deathly dark humor, Mike Bartlett’s play raises questions about the world we live in, and what the future could look like not too far from now. ”

Mike Bartlett’s Contractions has been heralded a “humdinger of a corporate black comedy,” by the Washington Post. DC audiences will be familiar with Mr. Bartlett’s work due to the recent production of King Charles III at Shakespeare Theatre Company

Julia Hurley leads the creative team for Contractions with Daniel Mori as Scenic Designer and Technical Director, E-hui Woo as the Lighting Designer, Jordana Abrenica as the Sound Designer, and Deborah Gur as the Stage Manager.

Online sales end 2 hours before a performance, but tickets may be available at venue 45 minutes prior to a show.