The notion that medical technology will one day enable human beings to live indefinitely is not just science fiction. Preventing the aging process (or “ending aging”) is an actual field of scientific research. The possibility of living forever is also the sort of plot device that could well be made into a play. It would be a good idea, though, if the play itself did not seem to last forever. 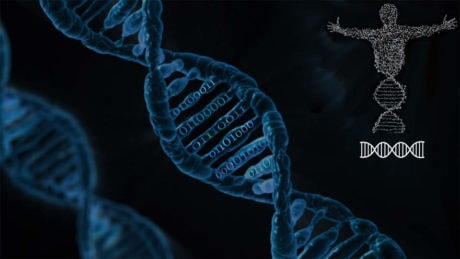 Lazarus, a new play written and produced by Evan Crump and directed by Ruben Vellekoop, features some excellent performances, and the playwright has a nice knack for snappy, aphoristic dialogue (“Time is not our friend”). Plus, there’s a rich-versus-poor politics to the play with pertinent potential, particularly at this point in the health care debate: Only the wealthy can afford “the Lazarus procedure,” a treatment that somehow cellularly extends life; the desperate impoverished are left to perish. Moreover there’s a side-effect: “Empathy was an early casualty of the Lazarus procedure,” in the words of 164-year-old Dax, a practitioner of the treatment. So there’s promising material here for sure.

But the story line Crump has crafted strains credulity and comprehension at nearly every turn. We know the time is the future, the 2160’s according to the author’s program note. Fair enough. A compelling story can take us far from the here and now even the spare Trinidad Logan Arts black box using Fringe-level stagecraft. I’ve seen and felt it happen there before. (A good story could also hold our attention against the voluble voices coming from the street on opening night.) But in Lazarus, though the actors move black set pieces around from scene to scene with deliberation (Carlotta Capuano did set design), we get few clues as to where the characters are and why at the moment they’re there. For that matter we get few clues who the characters are and what they want.

The exception is the plot line of a poor widowed young mother named Em (Katie Jeanneret) whose infant will die unless she can persuade Dax (an excellent Bruce Alan Rauscher) to treat her child. That narrative threads through the play, though with none of the emotional impact one might expect of a mother-child drama. Its virtue is that it is followable.

Meanwhile, there is a gang of lower-class thugs led by Rude (an excellent Steve Lebens) who represent egalitarian resistance to the “plutocracy” being aided and abetted by the Lazarus procedure (David Jourdan as Sledge, Tony Thomas as Norse, Nick Maka as Trimble). Accordingly, they instigate stage combat (Casey Kaleba is fight director) and much men-in-groups bravado. I had the distinct impression during their scenes that Crump’s quick-witted but cryptic script would make a much better action/thriller movie—the medium that excels at high-stakes machismo—than it does onstage without clear context or reason to care.

Two other women are in the cast of characters and upon their first entrances they are both very intriguing: Trish (Devora Zack) is a cop, armed with a gun and martial arts chops. Her subsequent involvement in the storyline, however, is disappointingly random. And the character with the most fascinating back story is Reina (an excellent Star Bobatoon) who was married to Dax but died 50 years ago. She appears to him periodically as a visitation or apparition. Alas, she remains an enigma, and as scripted their unresolved scenes lend emotional dimension neither to Dax’s character nor to the play.

Reina’s other-worldly entrances are well enhanced by Sound Designer Glen Oliff and Lighting Designer Alex Brady, who have both done all they can within their means to help the story along.

The author in his program note wrote,

It is my hope that audiences for this show will think about their own views on life and death, the world that they’ll leave behind, and what resonance their life will have after they move on.

Those are deep thoughts on vital questions that my own mortality prompts me to ask of myself almost every day—but none of that occurred to me during Lazarus. I did reflect, however, on the passage of time.