The Words She Gave Me, Solia Bickersteth’s ambitious multimedia project, is a bighearted and moving exploration of how African-American women have shaped one another’s concept of womanhood. Sisterhood is powerful, she tells us. It is also intensely spiritual. 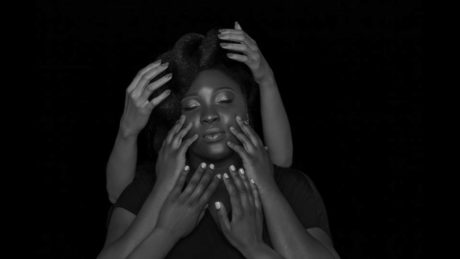 As a DC-based singer-songwriter, actress and entrepreneur, Bickersteth not only wrote and directed the production, but also performs several original songs. Her lovely voice conveys a tender and poignant look at how black women, influenced by the female relatives and friends around them, re-imagine their lives and struggle to spring free of stereotypes and submission. Sometimes, we learn, that means detaching themselves from the traumas experienced by their own mothers.

Bickersteth has assembled an appealing cast of both young and seasoned actresses and dancers to explore black womanhood through a series of dances, songs and narratives. Alesia Ashley, Cassie Williams, Regina Cameron, Kammeran Tyree, Arianna Adair, and Magali Palmer-Young play parts ranging from restless young ingénues to worldly women steeped in self-knowledge. Starting with a simple question, ‘What’s My Name?,’ they spread their wings in pieces that measure the passage of time, plead for acceptance, and express love as they plumb the influences of other black women on their own sense of selves.

The performance is fashioned as a series of narratives, songs and dances. Generally, the short narrative pieces, plus Bickersteth’s songs, which she accompanied on electric guitar, pack the most power. Ayanna Gallant underscores the tensions inherent in this production with her unerring percussion. As a singer, Gallant’s occasional harmonies with Bickersteth were gorgeous, giving the songs additional gravitas. Adding more instances of vocal collaboration would be most welcome!

The dancers, while lovely to look at, and well-choreographed by Candace Foreman, were less convincing as vehicles for conveying the important emotions that the production seeks to explore. Their pieces could be shortened to avoid a bit of monotony that sets in just prior to the very powerful and inspiring ending.

The Words She Gave Me’s episodic structure depends heavily on bold staging to move the production along. Technical Director Axixa accomplished this with her dramatic lighting and sound direction. She made good use of the ample stage at the Atlas’ Lab II, grandly filling the space with just a few performers clad in a changing array of beautiful, colorful chiffons.

Bickersteth’s production is a powerful paean to the force and influence of black sisterhood. It also offers a unique look into the psyches of some contemporary women of color. Her participation in the Fringe Festival will no doubt nurture her vision and expand the creative possibilities inherent in her subject. I look forward to learning how this promising production evolves into a classic of contemporary theater.