Ten-minute plays are a modern phenomenon. Some critics refer to them as “theatrical fast food” or “audience sound-bites” but this type of play demands a writer who can present exciting ideas in the shortest, most direct way possible, and actors who can create striking first impressions. Audiences enjoy the challenge of seeing many plays in one evening. After all, if one offering isn’t to your taste, the next one is only minutes away.

The Old Academy Players has presented a “Summer One-Act Bonanza” of world premieres since 2009. The format is simple. No designers are employed, and the settings are minimal, usually a table and chairs (dinner tables and restaurants are popular locations). The settings are changed quickly as the director tells what drew him/her to the play. The eight plays are comfortably presented in two hours.

This year’s plays offer roles for 27 actors and there are eight directors. Leading area performers (such as the always-excellent Michelle Loor Nicolay and Norma Kider) enjoy appearing in these short but challenging appetizers.

Here are some thoughts on the offerings that this critic liked best.

I Just Want to Say Hello by Nancy Frick (directed by Sarah Labov) is set in a conference room in a swank co-op building. The board is upset with Bennett (Jim Golden) who has a habit of saying “Good morning” and striking up conversations with fellow tenants. Since this invades their privacy and interrupts their cell phone experience, the tenants want him removed. The board members (Kellie Cooper and Marc Johnson) offer their complaints as they search their phones. Only the older board member (Michelle Loor Nicolay) is capable of a simple conversation. The play is quick, sharp and has a lot to say about the isolation that modern life is forcing upon the human race.

Surprise by Mark Harvey Levine (directed by Mark Rohland) finds Peter, a nerdy young man (Nolan Maher), in a café, about to be dumped by his pretentious girlfriend (Natalie Bonacci). But there is a Twilight Zone twist. Peter is psychic; he can read minds, but only two minutes into the future. This gives him the annoying habit of knowing what his girlfriend will order and finishing her sentences. Once the idea is explained, comedy ensues. At one point he receives a towel seconds before he is doused with water. The writing and performances are direct and to the point. 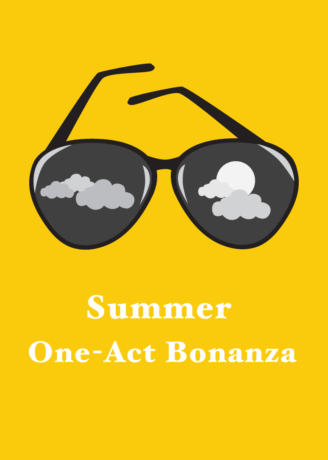 Crossroads Bar by Jillian Bosmann (who also directed) has the reunion of two high school best friends (Natalie Bonacci, Nolan Maher) who have lost touch. The audience expects her to discover that he has come out as gay. Wrong! He has always been straight. What happens next makes hilarious comments on the confusion of modern life and relationships, which is pretty clever for ten minutes.

All eight of the plays have resourceful ideas that provided the audience and performers with a rewarding evening. Each viewer will have a different favorite, which is what the ten-minute experience is all about.