Inevitably, we will each encounter some kind of experience with death as we grow, and although it may be one of our greatest shared experiences, grieving is still a personal process. A mixture of biting wit and heartfelt honesty, The New and Improved Stages of Grief, playing now at Act II Playhouse, lightheartedly reflects on the process of mourning as it relates to us internally and externally.

Written by and starring Mary Carpenter, this solo comedic look at the ins and outs of loss is a riff on the now-famous stages of grief as outlined in Elisabeth Kubler-Ross’s famous book On Death and Dying. Carpenter’s take is both an update and a throwback, including references to Harry Potter as well as a 1950s guide to coping with death called “Death with Dot,” a segment in which an affable companion takes you through the proper way to handle the public elements of the process – what to wear at a funeral, what to say to the bereaved, how to send a sympathy card, etc. Ever the happy helper, Dot’s motto is “Death can be awkward, but it doesn’t have to be, and I’m here to help.”

Mary Carpenter has built the show around her own personal experiences, which are revealed early in the intro, with the significant losses of her brother, prom date, and close friend. Her comedy style is familiar and comforting, yet pulls no punches when it comes to just how difficult the psychological recovery process can be after losing a loved one. She takes on various personas throughout the evening, as she outlines her own new stages of grief including “WTF!?” and “Tuna Casserole,” to name a few.

This one-hour tour of the grieving process is impeccably shaped by Director Megan Bellwoar-Hollinger and Lighting Designer James Leitner. The pace is relaxed and fresh as the array of spaces are created on an existing interior set, including God’s waiting room and the actual funeral itself. Carpenter changes minor costume pieces as she proceeds, with the focus on her own amusing transformations rather than an elaborate production element.

A large portion of the evening relies on Carpenter’s quick improvisation skills as she calls audience volunteers onto the stage for a brief workshop on what to say at a funeral or how to plan financially for all of the therapy and comfort food you’ll encounter in your own mourning process when you lose a loved one.

The lightness of Mary Carpenter’s viewpoint reminds us that there are awkward parts of death, at which we can still manage to laugh. What she observes so poignantly is that grief is about taking care of others just as much as it is about taking care of ourselves. The New and Improved Stages of Grief allows us to have a chuckle in the face of death while reminding us not to take a single day for granted. 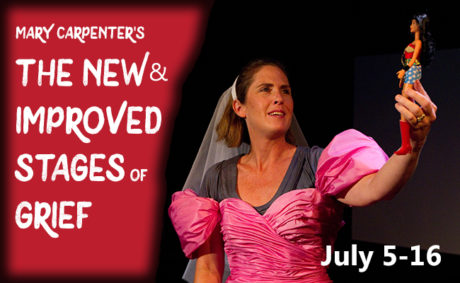