LIFE: A Comic Opera in Three Short Acts is neither quite an opera nor a musical; it is not a really a comedy or a drama. It’s a bit of everything, using classical music, Broadway, doo-wop, and more to tell its story. Neal Learner’s musical, previously presented as a reading with Monumental Theatre Company, returns as a full production mounted by Del Ray Players. There are no great heroes, no star-crossed lovers, or maniacal villains in this show – rather, it explores the laughter, the love, and the sorrow of ordinary life, as told by one family. 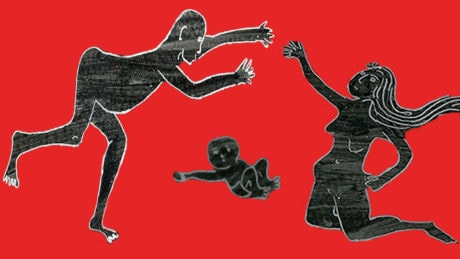 The story gets off to a raucous start in “Pain,” when Dallas Milholland’s Joan is in labor, aided by her hapless husband (Joshua Simon). As the act progresses, the couple flash back to when they first met (“The Stars Aligned”), and consider the path that led them to where they are. They share a dance in their memories, a charming number choreographed by Bryan Stopak. Musical Director Brandon Scott Heishman guides the cast through Learner’s ever-changing score, managing to make the transitions between contrasting numbers run smoothly, albeit with a couple of vocal uncertainties from some of the performers.

Soon the twins are born, appearing as puppets held by Stefany Pesta and Will Hawkins. They announce their presence quite forcefully in “We’re Here,” foreshadowing the strong personalities they will develop. Some of the funniest moments of the musical occur thanks to these two: “I Want My Truck” will resonate with any parent who has ever had to deal with children demanding several things at once, loudly. The twins grow into radically different personalities, with Hawkins’s Max being drawn to fighting and guns and Pesta’s Sally being perfect in every way… as she informs the audience in “I Am Perfect.” Pesta is a standout vocalist in this production, weaving her clear and bright voice through Learner’s complex harmonies and varied musical styles.

Learner’s musical is divided neatly into three acts that show the different phases of this family’s life: the first, with the parents as a young couple just having children; the second, watching the children grow up and get pushed (literally) out into the world; the third, and saddest, with the circle of life coming to a close. This method does sacrifice specificity: the characters are not complex, nor do they face new and unique challenges, and at times the story is almost too broad. But the themes – life, love, loss, journey – are so universal that it is easy to relate, so the musical is funny, and sometimes moving.

Clare Shaffer directs this show with a deft hand, bringing the heart and the laughter out of this story. The setup is simple: a large rug in the middle of the floor to define the space, four chairs that are moved throughout the show, and atmospheric lighting by E-hui Woo. There were some technical hitches: while providing captions is an excellent idea, the red glare of the screen is difficult to ignore when mistakes are made – the captions were often a verse behind the singers. In addition, including song titles in the captions resulted in stealing a few punch lines from the performers.

LIFE is appropriately named, showing us not just a glimpse of a story, but the way that one person’s story grows into the next’s. And it is brought to life with humor, with wit, and with great energy by this talented cast.

Running Time: 65 minutes, with no intermission