“My employer is an asshole.”

Shakespeare said that. Ok, not exactly. But the Rude Mechanicals somehow fit the line seamlessly into Arden Now, their abbreviated and modified – yet still spoken in verse – version of As You Like It. 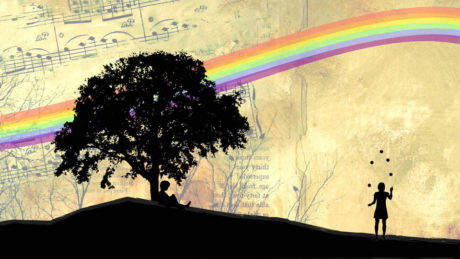 Per Director Melissa Schick’s director’s notes, Arden Now takes As You Like It and sets out to eliminate the “problematic baggage left over from Shakespeare’s time.” Primarily, this involves a re-examination of the romantic relationships and gender identities in the show but it also imparts the show with a current, youthful vibe that I liked very much.

Regarding the exploration of gender issues: Gone are Shakespeare’s musings on the differences between the sexes, replaced by gender neutral pronouns, used to create a world in which gender is freed from the strict confines of he/she, fluid relationships and a permission to explore gender identity beyond traditional confines.

But enough of Shakespeare’s original text and intent remain that one can get lost in the show and forget that Shakespeare likely didn’t create the character of Corin (Guenevere Spilsbury) as a pot-smoking hippy. Or that Phebe (Christine Smith) and Silvius (Eric Honor) probably weren’t really that into kink in the original version.

One place that the experimentation fell flat was in the iconic “stages of man” speech. Not having seen this play in years, I was really looking forward to this beautiful speech, but a few lines after Diana Dzikiewicz launched into “All the world’s a Stage and all the men and women merely players…” other actors begin speaking the lines simultaneously in other languages. I’m not sure what the intended effect was, but the result was an incoherent and confusing cacophony of sound.

This cast did a great job with the Shakespearean language, which dripped off the tongues of most with ease. (Although one performer would do well to practice in front of the mirror for a few hours). Holly Trout as Rosalind/Ganymede, Lynda Clark as Celia/Aliena, Jenn Robinson as Orlando and Lauren Beward as Touchstone, stood out in particular for their ease with the language and delightful character interpretation.

In keeping with the minimal Fringe style, the costumes (Dragan Rose) did their job and evoked just what they needed to. The setting was perfectly minimal with the frame of a wooden beach umbrella standing in for an entire forest, seasons indicated by a changing array of seasonal gauzes draped over its limbs.

All in all, Arden Now is a laudable theatrical experiment that tests just how well Shakespeare can stand up to modernization. In a world in which theater is often seen as “old people’s” entertainment, it is wonderful to see young performers exploring the artistry of the past in the vernacular of the present.