Let’s get this part out of the way quickly: Lisa VillaMil’s Kara Sevda (at Shopkeepers through July 22) is an exhilarating piece of theater, masterfully and assuredly directed by Kat Haan, beautifully acted by Tierney Nolen and William Foote, thoroughly realized in this Now What Theatre production, and you should see it. It is the best thing I’ve experienced at Fringe so far. It is the best play I’ve seen this year. At some point, because we’re all going to be best friends, we’re going to know each other well enough where I can say “Have I ever steered you wrong?” so why not just let that point be now. I am not steering you wrong. This play exceeds whatever hype I’m currently giving it. Go see it. I’ll go see it with you. I just need to grab my purse. 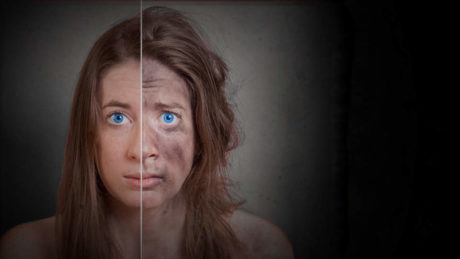 The rest of this review is a love letter to this production.

Two people (Nolen and Foote) sit guardedly on a bench in Paris. It’s October, and they’re bundled against a preternatural cold, waiting for a lottery to decide who gets to claim a spot on the Very Last Train Ever, south, out of France, into Italy. Their relationship with their past, and then with each other, is what VillaMil explores in this play.

Something has happened, because something is always happening, and in this case the something is the fallout from a nuclear war. Someone has bombed someone else but because something is always happening, no one seems interested in the who or the why: those questions don’t matter, anyway, at the point where you’re waiting to find out if your escape plan is going to work. What matters is that two people are sitting on a park bench. What matters is the work it will take for them to find each other.

There’s a historical fallacy about historic moments, that they fill our lives to the edges, and it’s all we talk about while it’s happening. But that isn’t necessarily true. We still have lives that sit on top of the moment, or beside it. It can be London, 1941, and you can still have time to worry about your marriage, your parents, petty betrayals, and supper. It can be Paris, but we’re each still individual provincial villages, with our own private concerns and deeply-held superstitions. Historic moments, for the most part, are actually only the setting, the backdrop, to our day-to-day.

So, two people sit on a bench at a train station waiting for the Very Last Train, and the world is ending – maybe completely, or just for the moment; there’s a train to Italy so perhaps there’s hope – and while that ending is writ large throughout this play, VillaMil wisely keeps us focused on Celia and Rhys. The machinations of whatever geopolitics got us here would overwhelm us. (And someone would say, in that version of the play, “Someone has to alert the president,” and then another someone, me, would yawn the loudest, longest yawn ever yawned and within it would collapse all time and space.) The human story of two people on a bench grounds us. The world can end in a lot of different ways.

The world can end simply, when you change your name. It can end philosophically, when someone burns all the books. It can end heart-numbingly when the mistake(s) you make overburdens the forgiveness you’re asking for. Or when you can’t save her. Or when you can’t let him. And yes, it can end when something as large and dumb and irrational as a nuclear war happens, too, but that’s just something that happens, because something is always happening, to all of us at the same time. It’s when our personal world collapses, on a Sunday morning, though. That holds more interest. Probably because, if not entirely fixable, it’s at least our own.

Kara Sevda (a Turkish phrase, aligned with blind passion or black love. “The kind of love,” VillaMil has said, “that eats you alive, that destroys you from the inside;” or, said another way, a kind of love that can end a world) is a hard-earned love story. What’s most moving –in both a hopeful way, and, simultaneously, in a way that breaks the heart – is how the end of the world doesn’t bring an end to hurt, or consequence. The world goes on, even as it’s ending. We may all have a last chance before the final chime. In fact, maybe nothing ever ends.