There are no absolutes in Proper Care of the Peace Lily. In this 100-minute performance, everything exists in relation: analogies, power differentials, and those actual familial relations that define our self-worth for the rest of our lives. An interesting concept for a one man show set in the vacuum of space. 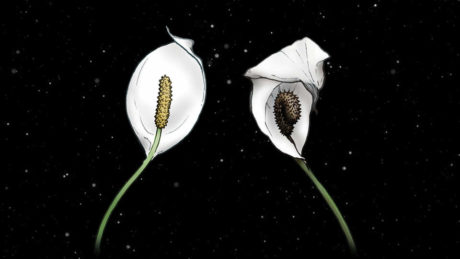 Alec Seymour plays a version of himself trapped in a cosmic void with nothing but a peace lily named Robert for company. He introduces several tropes to address the grief of losing his father in childhood – ghosts from the past, mystical prophecies, truths revealed through copious booze – but never runs any of them to completion. Instead, he uses the opportunity to subvert each cliché. Proper Care of the Peace Lily playfully riffs on the hollowness of common metaphors (“I don’t even know how to play chess!”), and of searching for meaning in a thousand different ways only to realize that you’ve been over complicating things to avoid sad and simple answers. It’s philosophical without being trite.

The play was weakest at its outset when a spiraling Alec uses colloquial language- “like”, “um”- that seems obtuse in the actor’s mouth. Alec the actor wears this version of himself like an ill-fitting costume. As the play progresses and the character is allowed to ruminate on grief and memories, his language becomes flowery, the drama is heightened, and Alec the actor thrives. I was endeared to him over its course.

Perhaps it is a stretch to call this show a comedy, the humor serves mostly to escalate the desperateness of suffering, but I did laugh out loud several times. I was impressed by Seymour’s physical awareness of his space. His movement is fluid and natural and used well to enhance comedic moments. Alec the actor’s oratory skills do not quite match his physical abilities. His comedic timing was off by a couple of beats for the introductory scenes. But he is at his absolute best doing character work. Disappearing into a caricature-like grandfather named Chuck, you can tell the actor is enjoying himself. Chuck provides the lead-in for all of my favorite lines: “I had to work” he says, scorning his grandson’s privileges. “You worked at YALE,” Alec shouts back.

Tyler Dubuc’s lighting design, the best part of the set, was highlighted by ambient caged mining lights strung throughout the Shopkeeper’s basement. Sound design by Dan Deiter was also effective and unobtrusive to the story-telling. I’m now convinced that the bass heavy ambient void sounds are what space would sound like if it wasn’t a, well, silent abyss. The visual projections fell short of my expectations. It took me a while to figure out that I was looking at a projected space-ship type window portal and not a pixelated Space Invaders craft hovering behind the actor. Even so, every piece of the brick-a-brack set was intentional and meaningful and I commend Director Nora Ives on a utilization of space so effective that the set felt like a developing character in itself.

The titular peace lily is a demure little plant, the type you would find in a nursery not Little Shop of Horrors. I was not entirely convinced that it deserved to be a focal point of the play. Seymour was more compelling in conversation with himself than with the plant and sometimes it seemed to be entirely forgotten for large stretches within the text.
The play works when it trusts that its audience is following its symbolism. When key points are spelled out- “this plant represents my dad,” “dad plant” – you feel a bit like groaning, “Yes, thank you, I managed to figure that one out on my own.”

At the end of the play, when Alec reaches a pivotal moment and cuts through all his philosophizing to so humanly bemoan that he cannot remember his father’s face, I found myself leaning forward in my chair. The grief was palpable and I felt a little teary-eyed. While it took the play some time to reach a consistent rhythm, you cannot help but applaud its progression and the empathy that Alec Seymour wrings out of his audience.