Ally Theatre Company’s second-ever production is radically different from the first, Miz Martha Washington, a darkly comedic historical play. Conceived and directed by Taylor Reynolds from art series, social media, and conversations with friends, Think Before You Holla is decidedly modern. This devised play is made up of a series of snapshots, monologues, and brief scenes, all depicting street harassment and its effects on women (or those perceived to be). Whether or not you have personally experienced anything like these stories, the play packs a punch you will not soon forget. 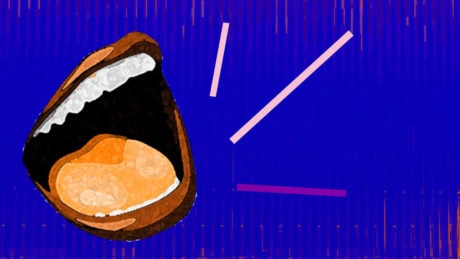 One of the things the show does most effectively is ask questions. Why do I have to take safety measures, or choose different routes home, or dress differently? Why do I have to make myself smaller in a public space that is just as much mine as it is anyone else’s? Why is my body not my own? One of the earlier pieces in the show is about a young woman following her morning routine: waking up, getting dressed, and deciding how she wants to appear to the rest of the world. The minute she steps outside the door, she is leered at while walking (earphones in, of course) past a group of men on a street corner who have no problem giving “compliments.”

The ensemble, made up of Jennean Farmer, Chelsea D. Harrison, Victoria Myrthil, Christina Neubrand, and Jehan O. Young, plays both the harassers and the harassed in this carefully crafted production. In one scene, Young witnesses a case of nonviolent stalking, and later imagines different scenarios of action she could have taken. In another, Myrthil and her mother, Neubrand, are out getting ice cream when some random passerby begins following them, offering to date the mother and be the daughter’s “new daddy.” Scenes such as these are interspersed with more ensemble-based moments, such as when the ensemble individually go over their body parts – “this is my elbow, this is my foot, these are my hips,” etc. – before concluding that “this is my body.” The actors also ask the audience questions: “raise your hand if you’ve ever been harassed,” “raise your hand if you have ever witnessed harassment and not acted,” making the piece very much a dialogue with the audience.

Ally’s creation is striking in its ability to make these situations, and their real-life consequences, real. As humiliating as it is to be laughed at for the simple act of walking down the street, being objectified or even groped, defending oneself is not always the best option. While many catcallers are otherwise “harmless,” some become angry when rejected… and some are armed.

This ensemble has a gift for impressions, embodying both a variety of situations and the mannerisms and speech patterns of their harassers. Whether they are playing victims or harassers, or even just neighbors sharing their stories, this cast is able to bring these characters to life in only a short time. Aided by Justin Propper’s sound design, costumes by Katherine Karaus, and lights by Jennifer A. Leon, this show is able to get its very clear message across.

My one question to the collaborators is whether they would consider expanding this story. Based on the voice impressions by the cast, the harassers they were portraying were largely black men, although the issues of harassment, sexual violence, and violence motivated by sexual rejection certainly transcends racial boundaries. As the piece goes through more development, this might be a question to consider.

With a stunningly talented and cohesive cast and direction by innovator Taylor Reynolds, Ally Theatre Company brings a zinger to Fringe – no matter your own personal experience with these issues, you will be left with something to talk about.