New Records is our column about recordings of shows and concerts. It’s a companion to the reviews that regularly appear here on DC Theater Arts.

This month we take a look at albums from two more shows from Broadway’s 2016-17 season — Hello, Dolly! and Groundhog Day. 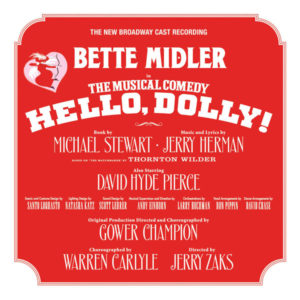 This production has been a sold-out hit that, nevertheless, has been greeted skeptically by some aficionados. Bette Midler is a crowd-pleasing artist, and her persona seems a perfect fit for the role of the enterprising matchmaker, Dolly Levi. Yet there are those who say her voice isn’t large enough for Dolly’s big songs.

The size of her instrument scarcely matters when every stage performer is miked. And certainly on a recording it’s not a factor at all. Midler gives us an intimate Dolly, and on this Masterworks CD she is engaging. It’s true that she lacks a belt, but let’s keep in mind that Carol Channing didn’t win fans by belting either; she projected humor and charm, and Midler succeeds in those departments. (Channing’s well-known Broadway successors, such as Pearl Bailey, Betty Grable and Phyllis Diller, made their mark with smallish voices. Only Ethel Merman gave us a strongly-projected Dolly.)

When Midler sings “I Put My Hand In,” she confides in us almost as if we’re together in her living room. She sounds adorable. She adds some nicely personal inflections and idiosyncratic grace notes. In the cast that surrounds her are two outstanding voices, reminding us of the beauties in Jerry Herman’s score.

Kate Baldwin is lovely as Irene Molloy, the young widow who falls in love with Cornelius. Known for her beautiful singing as Sharon in Finian’s Rainbow and Amalia in She Loves Me, Baldwin dazzles in this smaller role. Eileen Brennan displayed a nice voice in the 1964 original cast recording but sounded far too mature to be a believable match for the awkward young man who’s a clerk in Vandergelder’s dry-goods store. Baldwin, on the other hand, is a romantic dream when she sings the ballad, “Ribbons Down My Back.”

Gavin Creel, as Cornelius, also has an alluring voice. His high notes during “It Only Takes a Moment” are thrilling, which is more than anyone could claim for the originator of the role, Charles Nelson Reilly. Creel contributes strongly to “Put On Your Sunday Clothes,” “Dancing,” and “Elegance.” Reilly, however, made you smile every time he opened his voice, which quivered with vibrato. He, along with Channing, played everything for laughs.

Another asset of the new recording is the 26-piece orchestra, much larger than what we see in modern musicals, conducted by Jay Einhorn. The brass, reeds and strings carry us back to the type of sound we associate with Broadway’s golden age. They almost, but not quite, equal the punch of the band in the 1964 recording.

David Hyde Pierce as Horace Vandergelder is a disappointment. He doesn’t sing as well as he did on the Spamalot and Curtains albums, and fails to create an impression with his vocal acting. He has been given the privilege, in this production, of singing one song cut before the show’s opening in 1964, “Penny in my Pocket.” It’s a cute little song, not one of Jerry Herman’s masterpieces.

An additional pleasure in this new release is the comprehensive essay on Hello, Dolly! written by the knowledgeable and expressively literate Steven Suskin. The cover of the packaging is intentionally copied from the 1964 original.

The new recording is essential because it presents longer versions of some of the songs. “Put On Your Sunday Clothes” lasts more than five minutes compared to 4:16 on the old record; the charming “Dancing” waltzes in at 6:52 instead of 4:27; “Before the Parade Passes By” is 4:32 instead of 3:18; and the scene in the Harmonia Gardens (which includes the title song) is 9:30 instead of 5:41.

In addition, we get that restored song for Vandergelder, plus up-to-date sound. Good as it is, this cannot displace the memorable interpretations nor the hilarity of the original. Both of them belong in your record collection. The currently-available version of the 1964 recording, also on the Masterworks label, has bonus tracks of Mary Martin in the show’s 1965 London production, Pearl Bailey from the all-black 1967 Broadway version, and two songs by Ethel Merman. The Varese Sarabande recording of a 1994 revival, with Channing and Jay Garner, can be ignored. 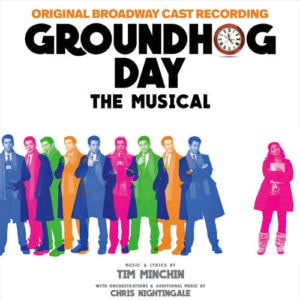 Groundhog Day is based on the 1993 movie, which is affectionately remembered for Bill Murray’s charming performance. In this Broadway musical adaptation, Andy Karl is the center of attention in a personable but very different interpretation. I’ve loved Karl’s work since he delivered his packages as the UPS guy in Legally Blonde in 2007, and he was impressive as the lead in Ahrens & Flaherty’s musical version of Rocky.

On stage, his handsome presence is augmented by cleverly staged ensembles. We are unable, of course, to see the spectacular choreography from Peter Darling, such as a bird’s eye view of a car chase, and a scene where we see Phil trying to electrocute himself by dropping a toaster into his bath with a flash of electrical sparks and, presto, Phil is lying in his bed. But on disc we have to rely on sound alone.

The premise of the plot is that a grumpy TV weatherman, Phil Connors, covering Groundhog Day in Punxsutawney, Pa., awakens each morning and is forced to re-live the day over and over again. Thus, we hear repeated tracks that virtually duplicate each other. Karl’s weatherman is stuck in a loop. And so is the music.

You’ve heard the mantra, “The show must go on”? In this case, these scenes must go on till the point of tedium. Three separate tracks, titled “Day One” (more than ten minutes long), “Day Two” and “Day Three,” are repetitions of each other. Annoyingly, they’re padded with non-musical sound effects.

The show was directed by Matthew Warchus and has music and lyrics by Tim Minchin. The same team performed those tasks on Matilda The Musical. Much of Groundhog Day’s score is vamping as background to visual action. Karl’s pop/rock songs grab our attention more than anything by the ensemble.

In the opening number, he proclaims a string of amusing put-downs of the hicks in Punxsutawney, such as “tiny minds, shallow talk, big rears.” Karl’s big number is “Hope,” as he sings about persevering. When his character tries to bed his producer, Rita (Barrett Doss), she sings a ballad with lyrics which you might consider clever or, conversely, pretentious. She describes “another sexually ineffectual, self-obsessing metrosexual, pseudo-intellectual, getting drunk and existential.”

“If I Had My Time Again,” sung by Rita and joined by Phil, demonstrates Minchin’s best work as his characters muse about whether to change their behaviors or to simply accept themselves with all their faults. Yet the lyrics are commonplace: “Regrets, I’d not even have a few / If I could do this thing that you say you can do.” And his rhyming is clumsy: “I’d sample all the samples / Look at things from different angles.”

There are too many poorly-chosen non-rhymes. Minchin makes Phil sing: “I’ve stolen eighteen million bucks” and Rita respond: “And I would worry less about my nose looks.” Stephen Sondheim would go nuts; he has criticized Oscar Hammerstein and Larry Hart for writing a few inexact rhymes!

Two minor characters get major songs in Act Two, demonstrating that the locals we saw in the beginning are real people after all. John Sanders as Ned sings “Night Will Come” and Rebecca Faulkenberry as one of Phil’s one-night stands sings “Playing Nancy.”

The script comes to a philosophical conclusion as Phil and Rita realize that there’s a way back in life to a happier self. “Seeing You” is a sentimental closing song with a country-music flavor. I would have preferred an inspiring redemption song to mark Phil’s transformation.

To read Steve’s views on other cast recordings, visit the New Records page.