The rise and fall of the largely forgotten 19th-century American artist John Banvard is the subject of Georama, an irresistible bio-musical by West Hyler (book) and Matt Schazt (book, music, and lyrics), with arrangements, additional music, and lyrics by Jack Herrick. Closing out the final week of this year’s New York Musical Festival at the Peter Jay Sharp Theater, the historically-based show, directed by Hyler, presents a fascinating slice of Americana with a quick pace, a balance of humor and heart, an authentic design, and a terrific cast that delivers the slightly fictionalized story and songs with genuine charm.

Touting “the most famous man you’ve never heard of” in the down-home opening number (“Nobody Knows”), the ensemble – backed on strings and piano by actors/musicians Ana Marcu and Jacob Yates (who also serves as Musical Director) – introduces audiences to the contributions that made Banvard the first millionaire artist, brought him international fame, and led to his private showing for Queen Victoria at Windsor Castle. His ingenious invention of a mechanism to create a continuous rolling panorama of the Mississippi River, painted in the 1840s on an advertised “three miles” of canvas, was given the name “Georama” by his fast friend and ultimate nemesis Taylor, as sung about by the two characters in their exuberant duet “Moving Scenes.” After composer Elizabeth Goodnow (who was soon to become his wife) vocalized the need for “Music” to accompany his “boring” stories celebrating the views he painted, the titular work would become the centerpiece of a traveling attraction for showboats, theaters, and museums around the world.

Unfortunately for Banvard, his fame and fortune were short-lived, once Taylor (later known as P.T. Barnum) appropriated his ideas, produced multiple imitations, and opened an American museum of curiosities before Banvard did, and the development of photography diminished the need for artists to reproduce scenes that could now be captured by a camera. Those facts, along with his own lavish spending, according to the narrative, made him the subject of gossip (“Did You Hear about John?”), led to his drinking and emotionally “losing it,” to the bank repossessing the extravagant castle he built on Long Island (known to his detractors as “Banvard’s Folly”), and to his wife going back West without him, before their final reconciliation and renewed mutual love of art and nature.

All of the real-life personalities and original songs come to life with the cast’s engaging characterizations and expressive vocals. In the lead, P.J. Griffith’s compelling portrayal of Banvard’s highs and lows is nuanced and sympathetic, as he evolves from an artistic loner (“Who Needs People”) painting for joy, not money (“Out Across the Mississippi”), to a smitten young man determined to share his life with Elizabeth, the daughter of a cynical pastor (“Your Dad Was Wrong”), and from a demoralized has-been who denounces his field (“Art Is a Lie”), back to a sincere artist motivated by his pure desire to immortalize the beauty of his country.

Cast in three supporting roles, Nick Sullivan skillfully distinguishes his disparate characters, with a convincing English accent for the showboat’s mercurial proprietor Chapman, who hires Banvard to entertain “The People of St. Louis;” a skeptical attitude for the mid-western Pastor Goodnow, advising the artist to “Make Things People Need;” and a naughty side of Queen Victoria, who surprisingly sports a beard and unexpectedly reveals that she likes “Just a Little” bit of sex! (While the song is one of the funniest in the production, it seems oddly unrelated to the overall theme of the show and the subject of Banvard’s art). Jillian Louis captures Elizabeth’s strength of character, in her desire to escape the control of her father’s church to forge a career of her own (“Try and Catch Me”) and her attempt to bring her husband back to the devoted artist he once was (“There You Are”). Her voice is impressively clear and strong – at times to the detriment of the balanced modulation of the harmonies, which she sings at a much higher decibel than that of her fellow actors. Rounding out the cast is the outstanding Randy Blair as the enterprising showman Barnum, who finds it necessary to lie “Just a Little,” while hilariously acknowledging that he’s “a capitalist with a capital C.” His devious sense of humor recalls the famous quotation erroneously attributed to him, that “There’s a sucker born every minute,” and his Vaudevillian-style song-and-dance numbers are among the highlights of the show.

The 19th-century theme is supported by a top-notch design that evokes the Victorian era, with period-style costumes by Whitney Locher (including a spot-on dress and jewels for Queen Victoria) and vintage instruments (including an old-fashioned upright piano and harmonium). The production’s first-rate artistry is enhanced by Ann Wrightson’s effective lighting, and a talented team masterfully recreates Banvard’s lost Georama, with a scenic design by Scott Neale, painting by the St. Louis Repertory Theatre (where the show premiered in 2016), photography by Matt Tibbs, and a projection design by Jason H. Thompson.

Georama is a thoroughly entertaining reaffirmation of the life and talent of John Banvard, which not only delights and educates audiences, but restores his reputation and preserves his legacy as an important and successful artist in American history. 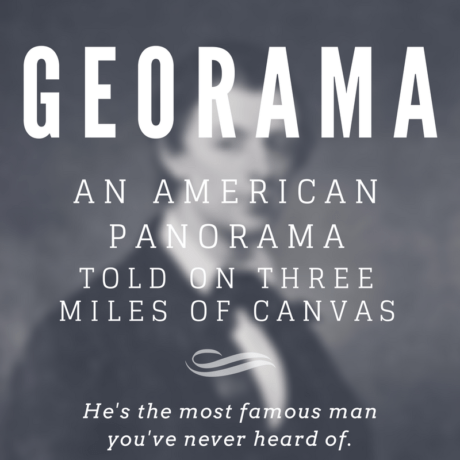