After seeing a group of onstage pirates repeatedly singing “Yo-ho-ho and a bottle of rum,” I went out to the lobby of the Hedgerow Theatre in search of refreshment. Alas, there was no rum to be found. The strongest drink they had for sale was coffee. I can only imagine how Long John Silver would react!

Hedgerow is kicking off its latest season with another edition of its Storyboard Series – a series of readings augmented by projected graphics, sound and lighting that provide a bit of the flavor of a full-scale production. (Previous Storyboard shows have included Hedgerow’s ongoing adaptation of The Hitchhiker’s Guide to the Galaxy, presented over the past two seasons.) 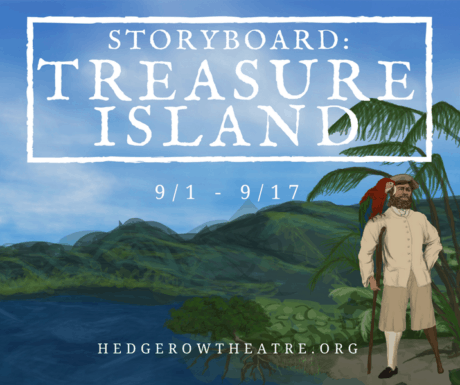 This time around, the subject is a lot more grounded than The Hitchhiker’s Guide. It’s Treasure Island, probably the most famous pirate story ever and one of the most durable (and frequently dramatized) 19th Century adventure stories. Robert Louis Stevenson described his novel as “a story for boys,” and it fits the bill by giving youngsters a brave, youthful hero to identify with. But Stevenson never talked down to his young audience; Jim Hawkins, the protagonist, ends up being much wiser and braver than most of the grown-ups around him (making him a prototype for heroes from The Hardy Boys to Harry Potter). The result is a story that, with its colorful characters and intricate action, holds up quite well, and can be enjoyed by all ages.

Hedgerow’s Treasure Island is acted out by five actors, clad mostly in black, standing and reading their scripts in front of a video screen. On that screen the audience sees artwork by Phoebe Titus that depicts the characters; backgrounds are seen as well, and there is some limited animation as well. Discreet music and sound effects are provided by David Titus. Jared Reed directed and wrote the adaptation, and the story moves swiftly and efficiently (though not always clearly; you may have to listen intently at times to follow the plot).

Despite having no costumes, makeup or scenery to help them, the cast brings the characters to life vividly, often switching between characters in the blink of an eye. Lisa Villamil projects nobility and decency as Jim, as well as connoting a sense of urgency that adds to the suspense. She speaks in a cultured, upper-class tone that contrasts nicely with Shaun Yates’ guttural Long John Silver. Matthew Windham is fearsome as the villainous Billy Bones and Israel Hands. Robert Gene Pellechio adds a touch of sensibility as Doctor Livesey. And Owen Corey earns lots of laughs when he jerks his head back and forth to portray Long John Silver’s pet parrot.

The actors are so good that I wish I could see them in a more elaborate production of Treasure Island that tells the story with more clarity and action. This informal, enjoyable version tells Stevenson’s tale well, but it just hints at what this crew is capable of.

Running Time: One hour and 40 minutes, including intermission.