In 1582, a village parson heard the deathbed confession of a man named Richard Barley, who had married his butter churn. Barley claimed he had been bewitched into matrimony by a fairy called Apron Jon whom Barley had spurned at market. Barley knew the marriage wasn’t holy in the eyes of God, but remained with the churn until his last breath, divorce not being an option, and only found comfort in the end when allowed to unburden his soul of his predicament.

Yeats tells us that in September of 1907, a French maid and the governess of Lord Erne, while rowing across the lough, saw “the small figure of a man walking on the water from the direction of Crom Castle past the ferry towards Corlat.” He muttered, as he strode, about a cat midwife. The women rowed quickly back to shore.

A young girl once saw a door in the side of a cliff. She entered, saw a feast spread on the table, and heard violins and fifes in the air but saw no orchestra. She quickly turned around, left the cliffside chamber, and said the pater noster three times while walking backwards. She knew she had entered Faerie, and had she eaten even a crumb, she’d no doubt still be there to this day. That’s the way it is in Faerie.

Rorschach Theatre’s Neverwhere (adapted for the stage, from Neil Gaiman’s novel, by Robert Kauzlaric; and playing at Atlas Performing Arts Center through October 1) is a fairy story not explicitly set in Faerie, but in some place called London Below, which is essentially Faerie, even if Gaiman doesn’t know this himself. A human, Richard Mayhew (Daniel Corey), is baffled out of his boring life of office drudgery through a chance encounter with a wounded young woman (Sarah Taruchini) on a sidewalk. Her name is Door, the last of her family, and she has been pursued, both in her world, London Below, and ours, London Above, by two unsavory assassins: Mr. Croup (an astonishingly-good-at-upsetting-me Robert Bowen Smith) and Mr. Vandermar (Lee Liebeskind). Croup is elegant Victorian danger and calculation; Vandermar solves every problem by feeding it its own liver. Richard finds himself an unwilling (and unwitting) participant in a complicated quest with visits to a Marquis (Grady Weatherford), the Lord Ratspeaker (Christian Sullivan), an Abbot (Scott McCormick), a Hunter (Megan Reichelt), and an Angel with (Cam Magee).

There’s a lot of plot, padded here and there with office scenes and an unnecessary backstory or two, and watching this play can sometimes feel a bit like watching someone else play a complicated video game with too many quests where you have to sometimes talk to a villager before you can visit an inn to get the gem that unlocks the portal to the Mushroom Kingdom where the Flute of Time may or may not be depending on a lot of other factors like, for instance, how attracted am I to this particular Player One and how exhausting will it be for me to explain his hobbies at the dinner party I never wanted to go to in the first place where’s that video game please and thank you? Door wants to find out what happened to her family, but this quest is complicated by a second quest, delivered by her father. The Marquis de Carabas has a quest of his own that he keeps mostly secret until the end. Hunter has a quest, as does the Angel of Islington, a late-to-the-game Lamia, and even, it could be argued, Croup, who is ever on the lookout for Asian pottery from the Tang dynasty. Everyone has a quest, and they all blend together or fall apart and you will either buy the whole lot with gladness in your heart or you won’t. We’re still in Faerie, but with a frustrating to-do list.

The men in this story are often centered in ways that sideline some exceptionally strong women, which is frustrating — especially with actors of the caliber of Sarah Taurchini and Megan Reichelt. Taruchini’s Door is incredibly competent, whip-smart, and seemingly self-reliant — but for some reason the play seems more concerned with Richard learning how to be a hero. Hunter has slain an astonishing number of beasts — the Great White Alligator King who lives in the sewers of New York; the Bear that lurks beneath Berlin; a mythically large Tiger that prowled Calcutta — but is ultimately side-lined, in a sense, by Richard. Richard’s companion for a spell in the underground of London Below, the Ratspeaker Anaesthesia, provides the ultimate “help” for him, and we’ll miss her, of course, in any subsequent sequels. If a man and a woman have equally murky ethical systems via which they’re operating throughout Gaiman’s story, it’s the woman who is punished more than the man.

What saves this play, though, is the staggering display of both technical dazzle and acting talent. Whether you follow the plot or stop caring is almost beside the point; this is one of the most immersive theatrical experiences I’ve ever had. Veronica J. Lancaster’s sound design is equal parts unnerving, witty, expansive, and surprising. Cory Ryan Frank’s lighting and the set/projections design by the team at Pixelumen transform a simple square theater space into a seemingly limitless and endless landscape: this pool of light is a river; blinding flashes describe and accentuate a character’s Trial by Ordeal; darkness freezes the audience in rapt anticipation of something horrible lurking in the shadows, expanding the story beyond the walls of the theater. Throw in some extraordinary puppets built by Tara Lyman-Dobson (with some additional prop items carried over from the production designed by Andrea Moore and Lauren Cucarola in 2013) and meticulously sumptuous costumes from Debra Kim Sivigny and Sudney Moore (like, for instance, I want to lounge all day in one character’s metallically iridescent cloak VERY much because I feel it fits my body and my mood) and the play makes so much sense as a theater tech’s dream.

Director Jenny McConnell Frederick has a sure hand on this rambling story, most clearly evidenced by the assured and collaborative way this excellent cast works together. Taurchini and Corey play only one character each, but the rest of the thirteen-member cast are put through a revolving door of characters and motivations, though some with complementary schemes. Thais Menendez plays Richard’s ice queen fiancee as well as the heat/life-seeking Lamia and a Serpent Queen. Sullivan’s Lord Ratspeaker is doubled, in a sense, by his portrayal of Richard’s colleague Gary (who violates a troll doll that doesn’t belong to him in Richard’s office). It seems unfair to pick a favorite from a cast that is so stacked to greatness, but I’ll say that Scott McCormick is a marvel to watch in his variety of roles, with a voice and presence that commands attention whether he’s hawking caged doves or rotely defining the rules of a quest’s challenge. And Cam Magee’s Angel is all the things you want from an immortal being: imperious, felicitous, seductive, and steely.

Faerie and its neighborhoods — London Below, for instance, or the kingdom on the far side of Hell — are liminal spaces, thresholds where who we are and who we’re meant to be can meet and briefly touch palms; or, meet, and then part ways. Rorschach Theatre’s production of Neverwhere is a consuming, absorbing, frustrating, and exhilarating exploration of mythic quests, hidden heroes, and acceptance not just of who we are, but who we were always meant to be. 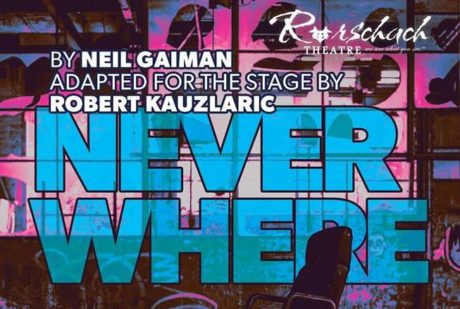 NOTE:
Neverwhere is being performed at the Atlas Performing Arts Center, which is not easily or quickly accessible by Metro. There’s a chance weeknight shows may end later than the last trains of the evening.