Just as you are taking down your Labor Day bunting and searching for last year’s fall decorations, there arrives a bit of spooky mystery and merriment for the whole family to enjoy. The Montgomery Playhouse eerily presents The Canterville Ghost at the Gaithersburg Arts Barn – which incidentally just celebrated its 15th anniversary. A wonderful tribute preceded the performance complete with local political dignitaries, live music, refreshments, a gallery opening celebration for “Celebrating 15,” and artist demonstrations.

As you make your way to your seats you are treated to a ragtime soundtrack which sets you in a turn of the (19th) century frame of mind. Arrive early so you can appreciate the construction and craftsmanship of Set Designer/Producer/Stage Manager David Jones. An enormous stone fireplace and magnificent stone walls transform the intimate Arts Barn stage into the main parlor of a half century old castle: Canterville Chase in rural Cheshire England. Kudos to the set dressing skills of Nancy Davis and the properties team of Jones, Loretto McNally and Naomi Ratz for their elaborate tapestries, furnishings and candles galore.

A fleeting glimpse of The Canterville Ghost, played by Dino Coppa fills the room with anticipation as the action begins. Director Naomi Ratz masterfully orchestrates the rapid character movements and scene changes. In Marisha Chamberlain’s stage adaptation of the original story – Oscar Wilde, also played by Dino Coppa, begins the evening telling the tale of the Canterville Ghost. Lord Canterville (Kyle Triak) – descendent of the castle’s builder frets over the need to sell the property to a wealthy American entrepreneur Hiram B. Otis played by John Van Eck. The Otis family does not react as expected – in fact they are glad to own a ghost of their own!

Lucretia Tappan Otis (Amanda Wesley) flits about with the work of setting up housekeeping – oblivious to the legend which is explained by an ancient house maid named Mrs. Umney (Corrie Bolcik). The trio of Otis Children: Virginia (Areya Campbell-Rosen) idealistically stakes out a window seat as her personal art studio space; Charlie (Isabel Miller) and Chip (Victoria Sova) frankly steal every scene with their juvenile antics and plans to catch the ghost. Mo Shokoohi plays the Duke of Cheshire and adds a delightful plot twist while seeking the affections of Virginia Otis.

Lightning and thunder provide an ominous overshadowing to keep the audience in suspense. The amount of rehearsal time spent by the Sound and Lighting team of Mathew Ratz, John Yendrey, Steve Deming and Mark Shullenbarger is evident throughout.

Stephanie Yee and Erica Arnold pulled together a gorgeous array of costumes culminating in the spectacular and bedazzled “Liberace” styled high collared performance coat worn by the ghost who was finally freed to enjoy the afterlife … or was he???

Hurry to see The Canterville Ghost before the apparition disappears! 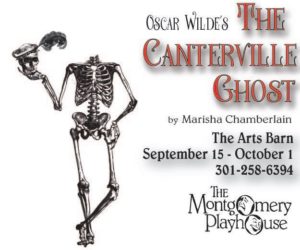