Moral dilemmas feed the dark humor of Bruce Graham’s Any Given Monday, directed by Jennifer Lyman. Marital infidelity, the loyalty of friendship, the eagerness of youth, and the logic of no logic at all is scrutinized. The choice of right and wrong is put in sound opposition. Is it a ‘shame-on-you wag-of-the-finger’ or a ‘thumbs up’ for doing whatever is necessary and at all costs?

Doing the right thing has been the life-long option for Lenny, played by Michael J. Fisher, a teacher who cries during To Kill a Mockingbird, keeps his feet off the coffee table, a dog out of the house, and does his best to nurture wife and daughter in a modest Philadelphia household. He’s put a roof over their heads and paid for his daughter’s Bachelor’s degree in Philosophy. But he is despondent, curled up on the sofa with Monday Night Football blaring. Fisher grabs the dynamic of the despairing slug with zombie-like tunnel vision, and later impresses with an “Emperor’s New Clothes” personality shift, bounding up on that coffee table and claiming it as his own.

Mick, played by Chuck Dluhy, is a glass half empty kind of guy and Lenny’s best friend. He bursts in on Lenny’s cocoon-like sleepy despair with vigor. He is jumpy with enthusiasm and politically incorrect about anything and anyone: African-Americans, his work in the subway, television commercials, and the teams going at each other on Monday Night Football. He is the guy who shouts at the TV, puts his feet up on the table, and looks out for himself. He is loyal in a darkish way and sees nothing wrong with a dirty misdeed if he can get away with it. Dluhy shows boundless energy in this role, nervously bouncing off one action and ricocheting into the next. He gets the job done so well; you wonder how he can be so unkind and uncaring except for his own purpose.

Isolated platforms on opposite sides of the stage introduce Sarah, the daughter, played by Amanda Marra, and Risa, the wife, played by Mattie Cohan. In these brief cameos, self-dialogues and internal conversations we find characters shifting gears. Considering parental decision-making, Amanda Marra delivers crushing one-liners about choices, and about being Jewish. The lines might be loaded but Marra surprises with timing or an accented tone that gets a laugh.

Risa, the wife and mother, operates with the logic of no logic at all. She has entered into an affair, left her home, and that’s why Lenny burrows into the sofa. Risa comments about the mix-ups of life, about a caterer so misguided and unaware that he serves bacon-laden potato salad for a Bat Mitzvah. In the meantime, she is fueled by her own pro and con list for leaving Lenny, greedy for momentary satisfaction, while creating havoc at home. Mattie Cohan conveys middle-age confusion and the urge to irritate to a tee.

Set designer Marian Holmes has done a solid job, setting a comfy surrounding for a living room sofa and chair, well-appointed wet bar, fireplace, and other details of middle class success. The isolated platforms work well for the monologues and lighting by Designer Michael Page assures that we attach to revealing moments. The Sound Design by Eddie Page shuffles between football commentary and irritating commercials. Played to good effect by the actors’ steady gaze and interplay with remotes, we see something very familiar. Unlike these characters, though, we hope for reason that prevails, compassion for others, and that wrong is sometimes just wrong, no matter what you want.

Any Given Monday settles in on the uncomfortable laugh with a gifted cast and believable setting; Thumbs-up to Dominion Stage for provoking the conversation. 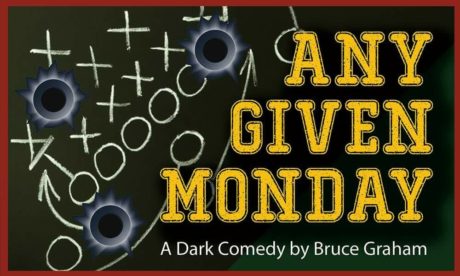