This provocative season opener, winningly directed by Hana S. Sharif, tells the story of a contemporary fundamentalist pastor’s startlingly abrupt declaration, following the celebratory news that the church’s long-standing debt has been paid off: “We are no longer a congregation that believes in Hell.” Calamity ensues, with Associate Pastor Joshua (ardently played by Adam Gerber), ultimately resigning from the congregation and forming his own church, resulting in a spiraling, corrosive divide and fallout.

“The Christians specifically examines leadership and faith. Faith is fundamentally what we have all been discussing since 9/11. The church in this play is a metaphor for our communities and our country. What happens when you no longer trust those you have entrusted to lead you?” said Baltimore Center Stage Artistic Director Kwame Kwei-Armah. “I’m thrilled to bring this production to Baltimore and for Center Stage to serve as a convener of many more conversations about leadership… in Baltimore, in Maryland, and in our country.”

Throughout the 97-minute production, the audience is consciously incorporated into the script, first as a part of the congregation, from Pastor Paul’s (robustly delivered by Howard W. Overshown) full-length sermon at the top of the play, then, as active reflectors in nearly every conversation, including heady discussions between Paul and his associate pastor (compellingly portrayed by Gerber) and his wife (fabulously depicted by Nikkole Salter), with each character constantly speaking into live hand-held microphones, heightening the emotional intensity of every scene.

Briskly paced by Sharif, each of the five-member ensemble is first-rate and convincingly committed to his/her corresponding roles. Overshown is exceptional as the conflicted and misunderstood Pastor Paul and action narrator; Gerber is sensational as the passionate traditionalist, Associate Pastor Joshua; Lawrence Clayton is measured as the pragmatic Elder Jay; Jessiee Datino is earnestly effective as church congregant, Jenny, a struggling, divorced single mother who offers a pivotal, touching testimonial that directly questions Pastor Paul’s motives; and Salter is steadfast and dynamic as Pastor Paul’s wife, Elizabeth.

Regardless of religious belief or doctrinal stance, The Christians is a timely, powerful piece that engages, grips and rivets, encouraging theatergoers to formulate their own deductions.

Running Time: Approximately one hour and 36 minutes, with no intermission. 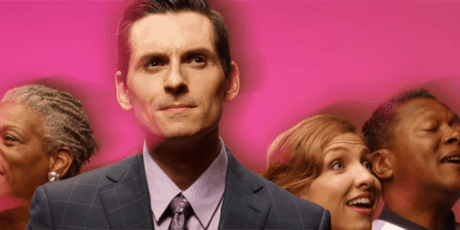