It was a night filled with excitement, laughs, and unbridled passion for indie theater as the New York Innovative Theatre Foundation celebrated the outstanding achievements of Off-Off-Broadway for its thirteenth year, in a ceremony held on Monday at the Gerald W. Lynch Theatre, John Jay College of Criminal Justice. Four-time host Jason Kravits – known for his 30-year-career on stage, film, and TV, including a long-running role on ABC’s The Practice and his current solo cabaret improv act Off the Top! at The Duplex – kept the show moving with high energy, hilarious commentary, and a fast pace, as honors were handed out in 26 categories, along with four special honorary awards, including the recognition of an Outstanding Stage Manager (a category often overlooked by other awards organizations).

The ceremony, written by Brian Silliman and directed by DeLisa White, combined live performances and videos with the awards presentations and acceptance speeches – all of which were gracious, engaging, and enthusiastic, and brief enough to finish the show a full fifteen minutes ahead of its projected three-hour running time (Did you hear that, Oscars?) This year’s nominees represented a total of 176 individual artists, 52 theater companies, and 48 productions, seen on stages in Manhattan, Brooklyn, and Queens. Among the illustrious presenters were actor Matthew Broderick, writer and performer Charles Busch, actress Angel Desai, and producer Tom Viertel. Immediately following the awards ceremony, which was sponsored by Kampfire Films PR, Theatre Development Fund (TDF), and Kyden Machine Inc., celebrants were invited to enjoy an after party at Ousia restaurant on West 57th Street.

The recipients of the 2017 IT Awards were:

OUTSTANDING LIGHTING DESIGN – Kate Jaworski, The Woman Who Was Me (Convergences Theatre Collective)

OUTSTANDING REVIVAL OF A PLAY – The Tempest (Smith Street Stage)

Congratulations to all of the nominees and winners, and to everyone who contributes to the creative work of Off-Off-Broadway and independent theater! 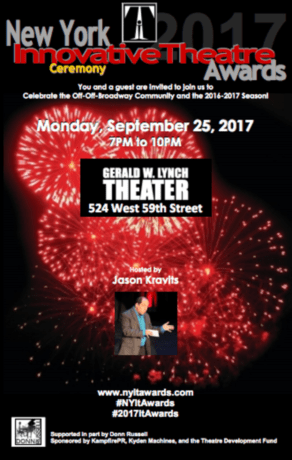