Despite the hiatus of FringeNYC in 2017, SoHo Playhouse is presenting a full line-up for its 12th annual Fringe Encore Series in September and October, giving New York audiences a chance to see a selection of the innovative works they might have missed from across the globe. Among the outstanding invited shows culled from the past year’s Fringe Festivals in Adelaide, Brighton, Edinburgh, Hollywood, and Winnipeg is Chase Padgett’s 6 Guitars. Following its multiple award-winning premiere in the Orlando International Fringe Festival in 2010, the tour-de-force solo performance toured around the world, including a successful run in the Winnipeg Fringe earlier this year, where it ranked among the top five highest grossing shows in that festival’s history. All with good reason.

Written by Padgett and Jay Hopkins, 6 Guitars doesn’t just showcase the Portland-based virtuoso’s musicianship and singing – though that would be enough to make for a thoroughly entertaining evening. It also highlights his acting, comedic, and ad-libbing skills, along with his profound love and understanding of the essence of six musical styles in which the guitar has traditionally been a centerpiece: Blues, Jazz, Rock, Classical, Folk, and Country. Using only a chair, a drink, and a single electric guitar, Padgett creates an engrossing story that interweaves the distinctive personalities and preferred genres of six fictional guitarists, all characterized with keen observation, humor, and heart.

From an octogenarian blues man to a 20-year-old rock-star wannabe, from an intellectual jazz connoisseur to an earthy country-and-western picker, well-trained Spanish classicist, and sincere folk singer/activist, the amazing Padgett makes split-second transitions, fluidly changing his speech patterns and accents, distinguishing his vocals and musical stylings, and affecting different facial expressions, hand gestures, and physical demeanors, as the varied guitarists address the audience directly, deliver personal anecdotes about “what we play and why we play,” and perform samples of the music and songs they love (the selections include such favorites as “Crossroads,” “Pachelbel’s Canon,” “Classical Gas,” “You Are My Sunshine,” “Ring of Fire,” “Blowin’ in the Wind,” and “Imagine”).

While he astutely recognizes and captures the familiar archetypes, Padgett also makes us feel as if his characters are real people. He fully inhabits them, and we come to know them through their reminiscences and philosophical musings, through the music that defines them, and through their informal, and often hilarious, interactions with members of the audience, which culminate in original impromptu songs and heartfelt messages about the power of music to bring us together.

There’s something for everyone in Chase Padgett’s 6 Guitars, whatever your taste in music or theater. And that’s the point: “If it doesn’t bring people together, don’t bring it into your life.” Kudos to SoHo Playhouse for bringing us this terrific show. 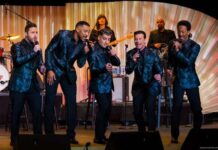 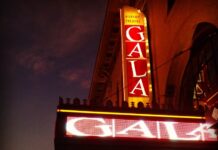