The play is set in 1953, and the Hays’ once-proud stage careers are fading due to the increasing popularity of television and cinema, and actors who haven’t been paid in a few weeks are quitting the Hays’ production which is on tour in Buffalo, NY. Although theater is in the blood of George and Charlotte, the troubles they now face may prove the end of their careers as well as their marriage.

Moon Over Buffalo is a delightful homage to classic back-stage farce, and the audience is treated to theatrical wackiness as the Hays struggle to survive. The stakes are high, as news spreads that Frank Capra has just lost the leads for his new movie and is flying to see today’s matinee to determine if the Hays could take the parts. Audience members don’t have to recognize that Capra was the famed director of movies such as It Happened one Night, It’s a Wonderful Life, and You Can’t Take it with You, to understand that this could provide the big break to revive the Hays’ careers with a chance for film stardom.

The Providence Players of Fairfax production is filled with experienced and talented actors who make the most of the scene-stealing, set-chewing, over-acting parts that playwright Ken Ludwig has written. Michael Donahue, as George Hay, and Maria Watson, as his wife Charlotte, are both wonderful and seasoned actors, well suited to the parts. Their physical and vocal abilities are called for with sword fights, diva histrionics, and drunk scenes that are joyously portrayed.

Jenny Madorsky plays their daughter Rosalind, who has returned to introduce her parents to her fiancé, Howard (Scott Stofko), despite the clear chemistry she still has with the Hays’ stage manager, Paul (Chuck O’Toole). Rosalind and Paul’s mutual hostility/attraction suggests these actors would make terrific Beatrice and Benedicks, while Stofko is gamely pushed and pulled around stage as the unwitting stooge in the plot. Charlotte’s mostly-deaf mother, Ethel (Robey Manno) is the costumer for the company and her comic misunderstandings are fodder for the plays’ problems.

Eric Trumbull plays the company lawyer, Richard, who hopes to woo Charlotte. I hope to soon see Trumbull in a larger part, as his brief scenes provided a grounded, more naturalistic portrayal that beautifully balanced the unhinged theatricality of rest of the characters. The company is rounded out by Jaclyn Robertson as another love interest, and a small ensemble of supporting players who we briefly see.

The farce picks up steam as the play progresses. The gags are as well-known as they are well-played here, and the audience loved seeing some of the more familiar ones coming. Mistaken identities, secret romances, former lovers, confusion with costumes are all wonderfully done, as we also enjoy sword fights, slamming doors, and hilariously ineffective efforts to sober up a drunken actor.

The costumes by Christian D. Faulkner and set design by Jason Hamrick are both spot on. Faulkner has given the actors beautiful clothes appropriate for the early 1950s and elegant costumes for their roles in Cyrano and Private Lives. Hamrick has provided a playground for the actors with multiple doors to slam and furniture to either bounce upon or chew up. It is a wonderful comedy, riotously directed by Jayne Victor, who clearly loves the farce as much as Ludwig, and both director and playwright know what to do with it. It is well worth coming to see Providence Players’ Moon over Buffalo.

Running Time: One hour and 50 minutes, with one 15-minute intermission. 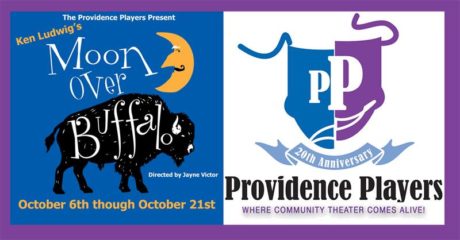 Moon Over Buffalo plays through October 21, 2017 at Providence Players of Fairfax performing at the James Lee Community Center – 2855 Annandale Road, in Falls Church, VA. For tickets, get them at the door, or online.