“We all had things we had to let go of,” says the woman flanked by her six sisters-in-arms in Night Witches, directed by Kathleen Anne Hefferon, and created by the seven women who comprise the ensemble: Madeline Barr, Elizabeth Chahin, Josephine Cooper, Alida Rose Delaney, Alexis Ingram, Elena Kritter, and Maggie Ronck. Night Witches tells the story of the all-female 588th Night Bomber Regiment of the Soviet Air Forces during World War II. The “Night Witches” were given their name by German forces who likened the sound of their planes gliding on the wind to the sound of a broom sweeping.

Night Witches is one of those plays that is so well written that it draws you in immediately and refuses to let go until it has taken what it wants. The creativity and passion of its seven creators is obvious and should carry it far beyond its current incarnation, which is still in the process of being revised. While the props and set seem simple at first glance, they are employed in a manner that sweeps the audience along with the pilots as they navigate the darkness in planes so flimsy they weren’t even meant to be in combat. Moments of terror and joy are dispersed throughout and superbly acted.

Madeline Barr and Josephine Cooper play Tatiana and Yevgenia. Tatiana is a mother with two children who, as an experienced pilot, takes the seventeen-year-old Yevgenia under her wing. Olga and Alexandra, played by Alexis Ingram and Elena Kritter, are mechanics who spend half the play at odds with their roles in the war or with each other. Maggie Ronck is the imposing Marina Raskova, the leader of the regiment who is already a war hero at the start of the play.

The relationship between Nina and Polina, played by Alida Rose Delaney and Elizabeth Chahin, was one of the more tender and interesting portrayals of emerging love between women that I’ve seen recently, while Tatiana and Yevgenia’s story is easily the most tragic. Each woman in the ensemble plays more than one character, and each character bears the weight of her struggles with equal dignity and is given equal time in the narrative. When the women appear on the stage they each inhabit the electrifying presence of their characters, serving to underline the strength of their real-life counterparts.

Night Witches incorporates music and movement to varying degrees of success. During moments of high emotion the cast bursts into animalistic fits and wails. The repetitive movements during some of these scenes was distracting. While I appreciate the allusion to the witch-like and Paganistic power of the female pilots, I found that particular invocation to be much more effective when paired with the howling vocals and haunting music that wove a thread throughout.

The set, designed by Gene Kritter, alludes to the sparse and ethereal nature of the work. There are seven flimsy white dresses hanging from clotheslines amidst the spartan ruins of an airplane hangar. Everything placed in the environment ties back to the illusory nature of these women’s experiences and the fragility of human life, as well as the women’s ability to “construct” their own narrative.

While the play makes no direct reference to current events, it’s very difficult not to view the Soviet women’s fight against German fascists through a modern lens. Women all over the world, like the Soviet pilots, still struggle to hold on to what remains of the things they love without losing their lives and humanity in the process. The character of Yevgenia echoes the traditionalist ideal that women are not destroyers; they are creators. Another character insists that women only become warriors when they have no other options. There is no suggestion, at moments like these, of which sentiment is most accurate. Night Witches is, above all, a darkly resonant meditation on the nature of life and death and the thin line that we walk between them. This thin line is where life happens and where we each find our truths. Every woman in the 588th Night Bomber Regiment had to let something go to inhabit that fragile, shining moment in which she became the hero of the story – the story which is now, finally, being told.

Running Time: One hour and 40 minutes, with one intermission. 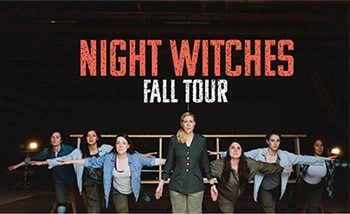