Brian Friel’s play, The Home Place, has taken its time to find its way to New York, where it arrived in good hands at the newly renovated Irish Repertory Theatre off Broadway. The play premiered in 2005 at the Gate Theatre in Dublin before transferring to the West End n London and is only now having its premiere in the USA. The playwright died in 2015 and Charlotte Moore, the Irish Rep’s Artistic Director, has longed for the right moment to bring this final work of Brian Friel’s to New York. She’s directed it herself in a manner that would have pleased him. She’s rounded up an excellent cast which includes Rachel Pickup as Margaret and John Windsor-Cunningham as Christopher Gore, both impressive.

Set in the parlor of Christopher Gore’s house (“the Lodge”) in Ballybeg, County Donegal, Ireland, in the summer of 1878, we meet Mr. Gore’s son David, and his longtime housekeeper Margaret O’Donnell, for whom both father and son feel unrequited love. Christopher is a native of England, which is to him “the home place,” though he’s lived in Ballybeg for forty years. His cousin, Dr. Richard Gore, arrives and becomes a house-guest, as does the doctor’s assistant, Perkins. The doctor is an anthropologist and he’s traveling through Ireland taking cranial measurements and recording the physical characteristics of the locals. His theory is that the Irish are inferior and he believes his data will prove that. Con Doherty is a young rebel who will come to confront Christopher Gore.

The play discusses the murder of a despised English landlord, Lord Lifford, in April 1878, just prior to the opening scene. It goes on, during the course of a single day, to tell the stories of the father-son wooing of Margaret, and the violent conflict which has been brought to a head by Con Doherty who represents a group of Irish patriots who resent Dr. Gore’s determination to prove the inferiority of the Irish through his cranial examinations.

Friel is an established and highly-accomplished playwright, with an international reputation. Philadelphia, Here I Come, which introduced him to American audiences as early as 1964, was followed by Faith Healer, Translations, Dancing at Lughnasa and others which have revealed his lifelong commitment to write in order to “reverberate quietly and persistently in the head, long after the curtain comes down and the audience has gone home.” The Home Place does accomplish this, but it cannot evoke the deeply personal response that it must have in Irishmen like Brian Friel.

The play is literate, and offers many choice confrontations which give opportunity to actors of quality to engage themselves and us out front as well. To those I’ve mentioned, I add Polly McKie as a lower class scullery maid, Con Doherty as the tough who threatens the British who are against the beginnings of Irish Home Rule, which he champions. Occasionally, Moore might have required a cutting back from one or two of her players, but all are effective in letting us in on what was, for me, a glimpse of a time and place I hadn’t known. She’s done us a service by resurrecting this play that clearly meant so much to its author. The set by James Noone, the costumes by David Toser, the lighting by Michael Gottlieb and the original music by Ryan Rumery and M. Florian Staab all contribute mightily to the unified style of the piece, and all of its production values are fully realized.

Charlotte Moore has assembled a first rate ensemble to breathe life into this glimpse of a divisive time in Ireland’s history. Sadly, it seems scarily relevant.

Running Time: Two hours and 15 minutes, with no intermission. 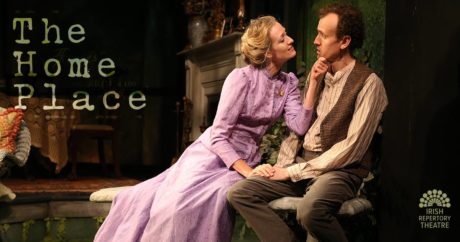