Louisa May Alcott’s evergreen tale of female fortitude and family virtues beams its inspiring message once again at American University’s lovely new production of Little Women, the musical. A talented cast, framed by a gorgeous set, excellent lighting, and a fine musical ensemble, provides local audiences with a charming and thoroughly professional performance of an American classic. By all means, go see it! 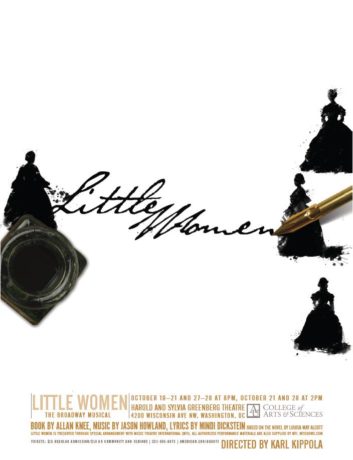 Few American works have been reinterpreted as often as Little Women. Written in 1869, Alcott’s semi-autobiographical novel about the March family of Concord, Massachusetts, during, and just after, the Civil War, was instantly popular upon publication. It was first made into a (silent) movie in 1917, and filmed three more times thereafter. A TV series, a Japanese anime, and an opera followed. In 2005, composer Jason Howland and lyricist Mindi Dickstein teamed with book author Allan Knee to create the Broadway musical starting Maureen McGovern as Marmee and Sutton Foster as Jo. Since then, it has been staged at regional theaters and universities. It is easy to see why: the production offers beloved characters, an uplifting message, and plenty of good songs for gifted singers.

American University’s production features two casts for the March sisters, their mother, and aunt. On opening night, Julia Messer shone as the aspiring writer Jo March – Alcott’s alter ego. Spunky, tomboyish, and headstrong, she struggles with her impetuous nature. “Could You,” a spirited duet with her Aunt March, is Jo’s vow to assume a more ladylike persona – a promise she will find hard to keep. In “Astonishing,” Messer, an exceptional singer and actress, lights up the theater with a show-stopping solo that proclaims her ambition and independence. “Small Umbrella in the Rain,” a duet sung with her unlikely suitor Professor Bhaer, underscores Jo’s passage into adulthood, with all the subtle changes, and yes, some compromises that this new stage of life demands.

Emily Corinne Smith as the romantic Meg, Christine Miyashiro as the peacemaker Beth, and Audra Gale as the entitled and tempestuous Amy play Jo’s sisters with great empathy and ease. The male characters, broadly sketched and also well-acted, feature the same actors nightly. Watch as each is transformed by March sisters. Sam Baum plays the formal Professor Bhaer who succumbs, albeit awkwardly, to Jo; the ramrod straight tutor John Brooke (Mark Sullivan) melts into a puddle of adulation in front of the beautiful Meg; the Bambi-like, comical Laurie (Drew Bondy) morphs into adulthood as he consoles Amy; and even the crusty Mr. Laurence (William Peters) is humanized by his fatherly affection for Beth.

The changing relationships among the characters are sketched adroitly in a series of ensemble numbers and duets including the spirited “Five Forever” (the March sisters and Laurie), “More than I Am” (John Brooke and Meg), “The Most Amazing Thing” (Laurie and Amy), and “Some Things are Meant To Be” (Jo and Beth).

As the girls’ beloved Marmee, Hannah Ruth Wellons projects the strength and moral authority that allow her to lead her lively brood through a period of enormous stress and scant resources. With her husband away serving as a Civil War chaplain, Marmee’s clear-voiced rendition of “Here Alone” aches with the painful hollowness she conceals from her daughters. Later, she consoles Jo with the beautiful “Days of Plenty.” Camille Cote plays the wealthy, inveterate snob, Aunt March, with the requisite dose of superior posture and hauteur.

The cast is beautifully directed by Karl Kippola whose sensitive interpretation of this appealing musical imbues the production with energy and appeal that transcends its place in time. Scenic and lighting designer Jason Arnold has created an elegant set that echoes the Shaker-like simplicity of a mid-19th century New England home. With absolutely minimal prop changes, he transports us from the March’s Concord parlor, to a New York boarding house, to the vast beaches of Cape Cod, and back home to Concord. His lighting, which illuminates enormous frame windows with opalescent blues and purples, fiery reds and oranges, artfully amplifies the changing moods and locales of the play. Musical Director Nathan Beary Blustein leads a small ensemble of strings, horns, percussion, reeds, and piano that provides flawless support to the singers, never overpowering them. Costume designer Barbara Tucker Parker perfectly captures the shabby gentility of the March family.

Alcott has often been viewed as ahead of her time with her exploration of female independence and fulfillment. The year 2017 has not been particularly kind to women – all the more reason to seek solace and inspiration in her tale of strength and hope.

Running Time: Two hours and 40 minutes, including one 15-minute intermission.