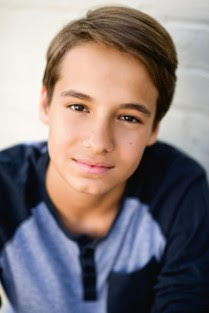 Please give us your name, and a brief description of your theatrical background.

My name is Cole Sitilides, and I will be playing Jay Kurnitz in the upcoming production of Lost in Yonkers. I started theater about three years ago. I first performed in community children’s theater shows at the Alden Theatre in Virginia. Next I was cast in my first musical, 13! The musical solidified my love for the stage and I continued in community theater until 2015 when I was cast in Ford’s Theatre’s A Christmas Carol. After I was in a couple more community shows and student productions including To Kill a Mockingbird and Thoroughly Modern Millie Jr. Most recently I was in Brighton Beach Memoirs at Theatre J in Washington, D.C.

What enticed you into auditioning for Lost in Yonkers?

I was sitting at home when I found out that Peace Mountain Theatre Company was having auditions for Lost in Yonkers. I had just finished Brighton Beach Memoirs at Theater J a couple months earlier where I fell in love with Neil Simon, and had performed one of Jay’s monologues a couple months before that. I decided to read the show, and by the time I finished I knew I had to come and audition.

How would you describe Lost in Yonkers to your friends and family and why is it still relevant to today’s audiences?

I would describe Lost in Yonkers as a dramedy with a lot of layers. It’s comedic at times, it’s dramatic at times, but above all it’s truthful. It takes to the stage the idea that families are not always perfect. The Kurnitz family is much like a real family with real issues that many members of the audience can relate too: children fearing their parents, animosity against one’s in-laws, and the unique yet strong bond between siblings. The play deals with sickness, debt, tough love, and courage, to name a few, that are ever present in society today.

You play a teenager living in Yonkers, NY in 1942. What do you think are the similarities, and what are the dissimilarities, from 2017?

There are many similarities present in the show for sure. Brothers today still fight, have inside jokes, and most of all, they still are there for one another at the end of the day. With Jay and Arty, no matter what happens, no matter how mad they get at each other, they will always go back to being best friends. Of course, 1942 is not 2017. Life is different. Grandma Kurnitz always expects fine behavior from Jay and Arty, and makes sure they know that things will not go well for them if they deliver anything but their absolute best behavior. Arty and Jay are just like other boys, though. They want to play, they’ll eat ice cream whenever it’s offered to them (mostly Arty), and will occasionally blurt something out that’ll get them into trouble later. It has its dissimilarities; clothing, furniture, décor, but the play really is a timeless representation about all the mess, love, and truth of family.