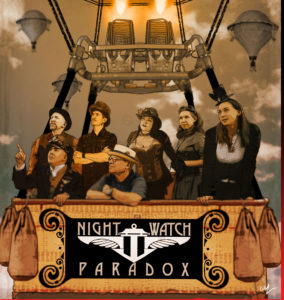 Steampunk fans! Your moment has arrived on the deck of a time traveling airship in Night Watch Paradox’s Magnificent Machines & Astonishing Tales. With lead singer Kaya Kismet weaving her spell over the crowd, you can’t help but sing along with these plucky privateers – who insist they are not pirates. The show is described as “An interactive rock opera about a steam-powered airship as it travels through time and space. Baltimore history plays a role as the heroic crew gets caught up during the Mobtown Riots of 1863 and ultimately help to defeat the British during the Battle of Baltimore in the War of 1812.”

This is indeed a rock opera. This band sports a guitar, bass, drums, flute, and a pretty hardcore harmonica player. Some of the interactive elements took a few rounds to catch on, but made for a fun addition to this show. The first thing I noticed was the costumes. Oh yes, someone has done quite a good job with outfitting this crew in appropriate steampunk attire.

For a history nerd like myself, the setting during the War of 1812 was unique and appreciated. I enjoyed that they incorporated so many Baltimore-specific references. Much of the storyline of the show is played out through communications with characters on a large screen, with songs representing each advancement in the narrative. While there were some technical difficulties, the audience seemed to respond well to this element – especially the humorous animations. Many aspects of the setting reminded me, quite pleasantly, of the iconic “Tonight, Tonight” music video by The Smashing Pumpkins. The time machine was particularly charming. The Doctor would be proud.

The lyrics and instrumentation in this musical perfectly fit the theme. Kaya Kismet is a wonderful singer and her bandmates kept the audience interested when they took over the lead microphone. My favorite numbers were the “Drinking Song” and “Bromo Seltzer.” The music enhanced the mood of the show and drew from a decades-long range of genres from 60s-inspired rock to 90s alternative, which really showcased the talent of each musician. There was even a little bit of Tchaikovsky’s “1812 Overture” played by the flutist.

Magnificent Machines & Astonishing Tales is a lightning rod of a show, electric in its delivery, which lives up to its promise of an adventure that sparks to life with each song. I highly recommend attending this unique musical. If you like what you hear, Night Watch Paradox currently has a Kickstarter set up to aid in the funding of a studio recording. 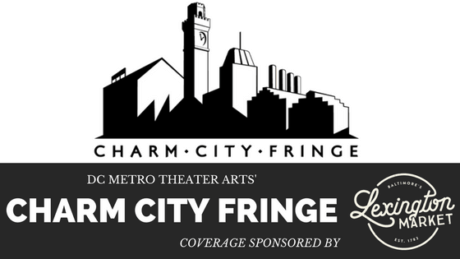 Baltimore’s historic Lexington Market is joining DC Theater Arts in support of our coverage of the Charm City Fringe Festival. The Market closes at 6 PM on weekdays and is closed Sundays, but we recommend that Fringe-goers stop by on Saturday to grab lunch and take a look around, in addition to checking out the local bands which play from 12:00 PM to 2:00 PM.